A new football news website which has poached around a dozen regional journalists to cover top British clubs is now officially live.

US sports site The Athletic has officially launched its new UK operation after a number of high profile departures from the sportsdesks of both the regional and national press.

The Athletic declined to comment at the time but has now confirmed each of the appointments together with three more from the regional press – Paul Taylor from the Nottingham Post, Chris Waugh from Newcastle daily The Chronicle, and Greg O’Keeffe who will join “soon” from the Liverpool Echo. 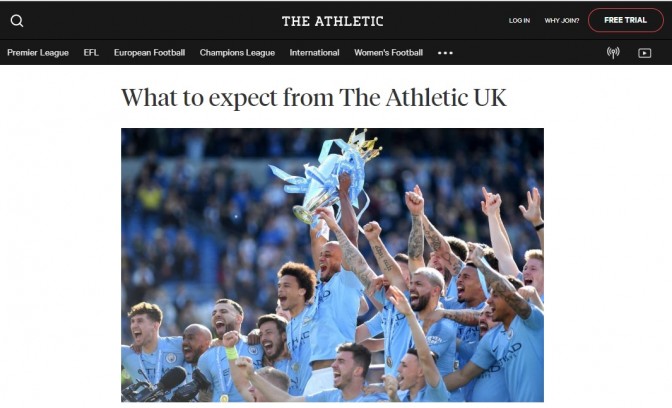 They will join a 57-strong editorial team that also includes Rob Tanner, formerly of the Leicester Mercury, Andy Naylor, of Brighton daily The Argus, Gregg Evans, of the Birmingham Mail, Michael Bailey, of the Eastern Daily Press, Mancy Frostick, of Sheffield daily The Star, and Richard Sutcliffe, of the Yorkshire Post.

A number of prominent national newspaper journalists have also been hired including managing director Ed Malyon, formerly of the Independent, editor-in-chief Alex Kay-Jelski, from The Times, Daniel Taylor from The Guardian and David Ornstein from BBC Sport.

Each Premier League team will have at least one dedicated reporter, based on the patch, while some leading championship clubs including Leeds United and Sheffield Wednesday will also be covered.

In an introductory piece on the website published today, Alex wrote that The Athletic “ignore the world of sensationalism” and clickbait and instead seek to share what he called “better – and untold – stories.”

He wrote: “Imagine hiring some of the best journalists in the country.  Imagine having the time and resource to plan and execute in-depth articles in a world where West Bromwich Albion matter just as much as Manchester United, where the inside story at Burnley is put together with the same passion as the lowdown on the latest managerial change at Chelsea.

“Imagine ignoring the world of sensationalism and trying to share better – and untold – stories. Trying to stand out in the clickbait crowd.

“No, this is not a bad reworking of a John Lennon song. It’s The Athletic UK and from today we are bringing our journalism to you. We’ve put a lot of love, effort and care into it to even get to Day One so I hope you enjoy it.

“You can follow our Premier League feed and get the best stories, analysis, features, interviews and long reads on every team from award-winning writers up and down the country.

“Love Leeds? We’ve got Phil Hay for you. Obsessed by Liverpool? We’ve signed James Pearce and Simon Hughes. Think this is Sheffield Wednesday’s year? We have Nancy Frostick dedicated to nothing else all season.

“The list of our brilliant writers is too long to run here but you will be reading calm, considered, intelligent articles on your team from the best in the business.”

The site, which bills itself as “the new home of football writing,” will operate behind a paywall, with subscribers able to take advantage of an introductory offer which will see them pay £2.49 a month for the first year.

Alternatively, a month’s subscription can be taken out at £9.99.

In a piece explaining the reasons for the paywall explaining the reasons for the paywall, Ed said: “If you were designing a sports website or app from scratch to be the best it could be for a reader it wouldn’t have aggressive pop-ups or autoplay videos or distracting adverts that dispirit you before you’ve even read the intro. It would be a clean, simple experience like The Athletic’s.

“If you were designing a sports website or app from scratch to be the best it could be for a reader, it wouldn’t feature a homogenous gaggle of miserable graduates sat in offices hammering out rehashed transfer stories from dubious sources. You would have the biggest network of beat reporters in the Premier League, with at least one journalist attached to each club, just like The Athletic’s.

“By adopting a different business model, The Athletic can change what readers expect from sports coverage.

“Putting up a paywall is not The Athletic being greedy. The more that people subscribe, the more we can plunge back into bringing good sports journalism to other markets and improving the product to make it even more valuable for subscribers.”

Founder and chief executive Alex Mather added: “From the moment we launched The Athletic in 2016, we knew our model was primed for expansion overseas and the UK, as a sport mad country, was an ideal location.

“We want to give journalists greater freedom to write the stories they are passionate about and the resources to do the best work of their career.

“The fact that so many of the UK’s leading football writers have decided to join The Athletic is a testament to the excitement we are generating.

“Ultimately, it is football fans who will benefit from this new investment in UK sports journalism.”