The Athletic launched in Chicago in 2016 to cover the city’s sports teams, and has since expanded its operation to hire journalists based in around 50 cities across North America – operating with a paywall and promising readers “quality local and national sports coverage” with “no ads, no clickbait – only stories with substance”.

It is understood its UK edition will initially cover football, largely Premier League clubs, and focus on content such as ‘long reads’, features and opinion pieces, rather than match reports, transfer stories or player ratings. 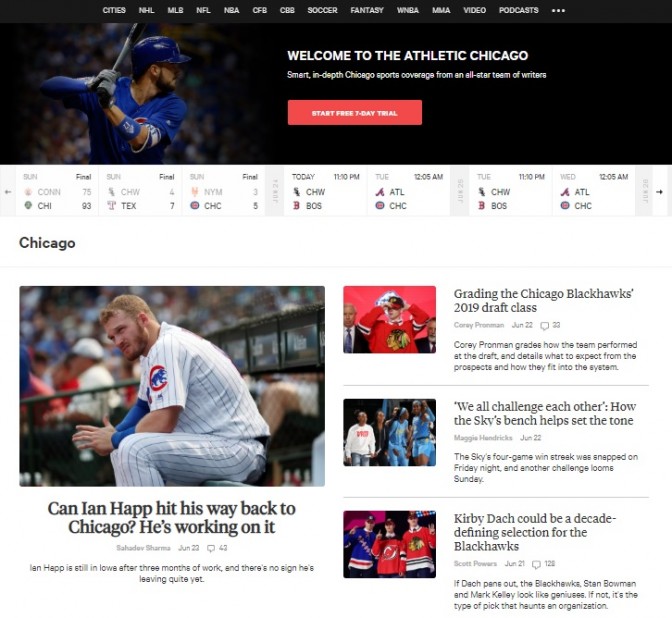 The Chicago news page on The Athletic’s US website

James, Phil and Tim have all announced their departures on Twitter in recent days, with all three mentioning they will continue to cover the clubs they report on in their new roles.

Although none of them have officially confirmed who their new employer will be, HTFP understands all three have been recruited by The Athletic.

After 14 years at the Echo, including eight-and-a-half as the #LFC correspondent, I’ll be leaving on July 5. It’s been an absolute privilege and I feel very lucky to have worked with so many great people. A new opportunity has opened up to cover the Reds. More on that to follow.

After 15 years at the YEP, I'm leaving the paper next week. Thirteen years home and away with Leeds United, which has been some adventure. They say you get less for murder but you get less for winning the lottery too. I'm grateful for all of it.

It’s with a heavy heart that I can confirm in a little while I’ll be leaving the E&S after 10 very happy years. Been an absolute blast. Delighted to say I’m still going to be covering them Wolves full-time in a very exciting new venture – you don’t get rid of me that easily.

Online media trade magazine Digiday reported earlier this month it would launch in mid-August with a team of between 50 and 55, with most recruits being writers.

Akhil Nambiar, chief of staff at The Athletic, told Digiday: “This is not an extension of the US; this is about how to empower our writers for a UK audience.”

The Athletic presently charges $9.99 (£7.86) per month or $50 (£39.35) per year, with Digiday reporting rates will be similar in the UK and allow subscribers access to all content from here and over the Atlantic.

A spokesman for The Athletic said: “We are looking forward to launching The Athletic’s written, audio, and video journalism in the UK. This is the home of the world’s most popular football league, of a wealth of brilliant writers and of fans with an insatiable appetite for coverage of their teams.

“The Athletic is building a line-up of the most talented and connected football journalists and our ambitious plans include not only comprehensive coverage of every Premier League club, but also highly localised football reporting beyond the top flight. More details will be released as the new season approaches.”