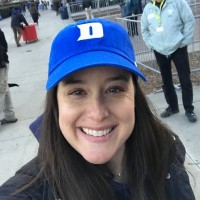 A director at sports website The Athletic has criticised the UK media industry over what she called the “less than fair” way it treats journalists and editors.

Taylor Patterson, the San Francisco-based website’s director of communications, has also defended past comments made by the company’s founder Alex Mather in which he stated his ambition to “suck dry” the best talent of local newspapers in the USA.

The Athletic officially launched in the UK earlier this month with a 57-strong editorial team – including 12 journalists poached directly from regional press titles.

Taylor, pictured, was taken to task on a previous quote by Alex, made to the New York Times in 2017, in an interview with business media publication Campaign.

Speaking about its US strategy in comments which were later deemed “regrettable” by The Athletic, Alex had told the Times: “We will wait every local paper out and let them continuously bleed until we are the last ones standing.

“We will suck them dry of their best talent at every moment. We will make business extremely difficult for them.”

Discussing the quote with Campaign, Taylor said: “Fundamentally, the point he was trying to make was that the traditional media industry in the States, and I believe also in the UK, was a point where it treats its writers and editors and others in a way that’s probably less than fair.”

She added: “I think those remarks are really born out of the frustration of many journalists about the conditions that they have to deal with in the workplace.”

The Athletic operates with a subscription model, and has recruited journalists to cover every Premier League side as well as other leading football clubs in England and Scotland.

Richard Bowyer, former editor of Stoke daily The Sentinel, earlier this month stated his belief that the decision by The Athletic’s new UK recruits to join the title would be “worth the risk.”

However, its approach to the British market has been criticised by Nick Wright, managing director of Havas Media content division Jump.

He told Campaign: “For a brand like this to work, it has to have a very strong brand that shouts ‘football’. It has to be a very strong product that isn’t available anywhere else and it has to grab and sustain its audience.

“The Athletic hasn’t thought about how to take this American model into British culture and it sort of smacks a little bit of that.”