A regional publisher is set to close three weekly newspapers due to what it says is a “continued decline” in local print advertising.

Reach plc has confirmed the final editions of the Harlow Star, Herts and Essex Observer and Buckinghamshire Advertiser and Examiner will be published next week.

The company says publication of the titles has become “unsustainable”, although there will be no editorial redundancies as a result of the decision.

The Advertiser was first published in 1853, the Observer in 1861, the Examiner in 1889 and the Star in 1980.  The Advertiser and Examiner subsequently became a single newspaper with two separate editions. 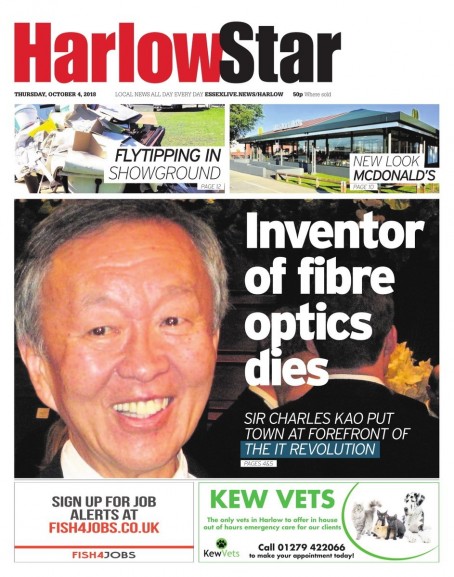 Three of the titles affected are paid-for, while the Star is largely distributed for free

A Reach plc spokesman said: “Due to a continued decline in local print advertising, unfortunately some print titles have become unsustainable.

“As a result, Reach can regrettably confirm the final editions of the Harlow Star, Herts and Essex Observer and the Buckinghamshire Advertiser and Examiner will be in the week commencing 28 January 2019.”

The last circulation figures available for any of the affected titles are from January to December 2017, when the Observer’s stood at 5,184 and the Advertiser and Examiner’s combined stood at 3,786. Figures for the Star have not been published since 2013, before the paper was bought by Reach forerunner Trinity Mirror.

The Advertiser covers areas including Beaconsfield, The Chalfonts and Gerrards Cross, while the Examiner primarily focuses on Amersham and Chesham.

The Observer was previously based in Bishop’s Stortford, but staff were reloacted away from its office in the town in 2016.

In 2017, Trinity Mirror closed the websites of both the Observer and the Star, with content about the areas they served moving to its Hertfordshire Mercury and Essex Live sites instead.