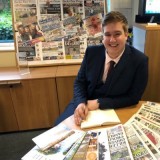 A new edition of a weekly newspaper is set be launched to fill the void left by a rival title which is closing this week.

Newsquest has announced the launch of an Amersham, Chesham and Little Chalfont edition of the Bucks Free Press, which will go to print for the first time on 8 February.

Reach confirmed last week that the Buckinghamshire Advertiser and Examiner was closing, along with the Harlow Star and Herts & Essex Observer.

The Advertiser and Examiner was published as two separate editions of the same paper, with the former covering areas including Beaconsfield, The Chalfonts and Gerrards Cross, while the latter primarily focused on Amersham and Chesham.

Newsquest has pledged that the new edition will have more pages and be 40p cheaper than its predecessor.

Group editor Andrew Colley, pictured, said: “This is an extremely exciting time for our team and the wider community.

“The Bucks Free Press has served our loyal readers for more than 160 years and this decision will hopefully prove our commitment to the Buckinghamshire area.

“Following the sad news of the closure of the Advertiser & Examiner, we knew it was important to continue their work and ensure people of Amersham, Chesham and Little Chalfont were still represented.”

The new title will be produced from the High Wycombe offices of the Free Press.

Reach said last week that its decision to close the papers was “due to a continued decline in local print advertising”, with no editorial jobs being lost as a result.