Almost 50 print jobs are under threat as publisher Trinity Mirror rolls out its ‘Live’ online brand to seven of its regional dailies.

Following the rebranding of the Birmingham Mail website as BirminghamLive in an attempt to create a “standalone digital business,” TM now plans to extend the model across other titles in the Midlands and Bristol.

It means the online channels of seven of the group’s Midlands dailies, along with the Bristol Post, will no longer bear the name of their associated newspaper.

The company says 49 editorial positions are at risk of redundancy as a result of the changes, the majority of which are likely to be print-related roles. 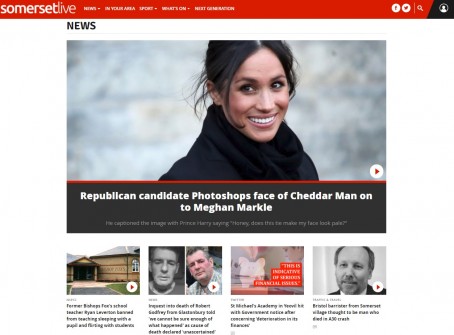 Somerset Live, one of the Trinity Mirror websites already run under the ‘Live’ brand

The Post’s online operation will now become known as Bristol Live, while the sites of Stoke daily The Sentinel, the Coventry Telegraph, Derby Telegraph, Nottingham Post and Leicester Mercury will also be renamed.

In addition, the Burton Mail’s digital operation will be absorbed by Derbyshire Live, although Burton is itself in Staffordshire, while the Bath Chronicle’s site will become part of the existing Somerset Live platform.

However the Liverpool Echo website will retain the newspaper brand name although its newsroom will move to the Live content model, which TM said “places a greater emphasis on engaging local audiences to become loyal readers online.”

Earlier this month the Birmingham Mail rebranded online as Birmingham Live, with print and digital teams being independent from one another within the newsroom.

The change, originally announced last September, resulted in what the company described as “a small net reduction in newsroom roles.”

TM said in a statement today: “Last autumn the Birmingham Mail began to pilot a new publishing approach aimed at creating a completely standalone and sustainable digital business under the new brand of BirminghamLive.

“We have been very pleased with the progress made in Birmingham where audience numbers are showing healthy increases since the switch to BirminghamLive, and today we are announcing plans to extend the model across the West and East Midlands, and our Bristol/Gloucester/Somerset/ Dorset regions.

“We are also continuing to refine our print production operations in some of these regions.

“Our proposals will result in up to 49 roles being at risk of redundancy and we have today entered into consultation with those affected.  The majority are likely to be print related roles.”

It is not the first time some of the titles involved in the rebrand will have had different web branding from the newspaper name.

For much of the past two decades, the former Northcliffe/Local World titles in the Midlands used the thisis brand online, for example thisisderbyshire.co.uk, while in the 2000s several of TM’s big city titles used the online ‘ic’ branding, for instance icbirmingham and icliverpool.