Daily journalists have urged digital chiefs to reverse a plan which will see their newspaper’s website named after a different county from the one where it is based.

Members of the National Union of Journalists at the Burton Mail have written an open letter to Trinity Mirror management to criticise the move, which will see the paper’s site merged with the Derby Telegraph’s to create a new brand called Derbyshire Live.

Burton upon Trent, where the Mail is based, is in East Staffordshire, although the Mail also covers areas of South Derbyshire and North-West Leicestershire districts.

The NUJ chapel at the paper has called for a halt to the plans – but Trinity Mirror says the Derbyshire Live site will still contain Burton Mail branding and that readers will still be able to navigate to content for their area. 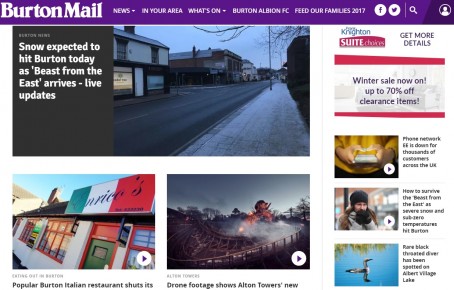 In its letter, published on the day Trinity Mirror shareholders approved its takeover of the Express, the Mail’s NUJ chapel said the change will “alienate local readers and have a severe impact on the identity.”

It states: “With both the Burton Mail and Uttoxeter Advertiser websites falling under the Derbyshire Live branding, areas such as Tean in the Staffordshire Moorlands, Ashby-de-la-Zouch in north-west Leicestershire and Fradley in Lichfield will all fall under a Derbyshire banner – yet each is 35 miles, 20 miles and 21 miles respectively from the city of Derby.”

“We are aware that similar integrations have already happened in relation to the Lichfield Mercury and Tamworth Herald websites now forming part of the Birmingham Live branding.

“We are also aware from chapel members at these titles that this integration has resulted in a loss of identity for the titles. It is now almost impossible when visiting the Birmingham Live website to navigate to specific Tamworth or Lichfield stories without visiting via a direct link from social media.

“While the move for the Tamworth and Lichfield titles has been devastating for the brand, both are weekly newspapers. From our knowledge, the Burton Mail is the only paid-for daily newspaper to lose its branding.

“In the light of this, the chapel has urged Trinity Mirror to reconsider its proposals.”

But a Trinity Mirror spokesman said:”The NUJ are jumping to false assumptions. There will still be Burton Mail branding on the Derbyshire Live site, and it will be very easy for readers to find content for their area. All social media accounts will remain active, and under the Burton Mail brand.

“Our experience with the switch to the ‘Live’ brand in Birmingham and elsewhere,is that it is helping us to increase reader engagement, and we are now reaching more local people per day than at any time since the 1970s.

“We also know, as evidenced by recent activity in the industry, that brands are more likely to be successful when they are part of digital platforms with large audiences. The move to put the Burton content into the new Derbyshire Live brand will ensure we give local journalism about Burton the best possible chance of being found by a larger audience, thus helping to protect it for the future.

“We are surprised to see the NUJ issuing press releases and passing judgement before trying to find out the background to what’s happening. We are committed to finding a sustainable future for local journalism online, and we look forward to the NUJ prioritising this over their grandstanding in the pursuit of headlines in the trade press.”

The Derbyshire Live proposal is part of a major revamp on TM’s digital presence which will see several other regional dailies adopt ther ‘Live’ branding online.

They include the Leicester Mercury, Nottingham Post, Bristol Post, Coventry Telegraph and Stoke daily The Sentinel, as well as the Mail and the Derby Telegraph.

A total of 49 redundancies are expected across the Midlands, the South-West of England and in Liverpool as a result of the plans, which follow the rebranding of the Birmingham Mail website as Birmingham Live in an attempt to create a “standalone digital business.”

According to the NUJ, around 16 of these job losses are expected to take place in the East Midlands.