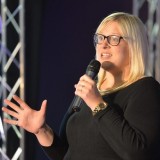 A former regional daily editor now running a county news website is among those under threat from Trinity Mirror’s latest round of newsroom cutbacks, it is understood.

HTFP understands Gloucestershire Live editor Jenny Eastwood’s job has been put at risk of redundancy following TM’s announcement on Thursday that up to 49 journalism roles could be cut across England.

The National Union of Journalists claimed on Friday that 37 of the positions affected were based in the Midlands and Liverpool, but said changes proposed for Bristol and the other centres in the South-West of England were “still emerging”.

HTFP revealed on Tuesday that Gary Phelps, editor of six West Midlands titles, is set to step down following the restructure.

Trinity Mirror has declined to comment, or provide a regional breakdown of where the affected roles are based, but it is understood Jenny’s position is among those at risk.

Jenny edited Gloucester  newspaper The Citizen, which switched from a daily to a weekly in October last year along with the Gloucestershire Echo.

At around the same time, Echo editor Matt Holmes was made redundant in a TM management restructure in South-West England in which Bath Chronicle editor Rachael Sugden was promoted to senior editor in Gloucestershire, taking on editorial responsibility for the county’s entire print and digital portfolio.

Jenny was given the title of digital editor in Gloucestershire, reporting to Rachael, as a result.

At the time, TM said Jenny remained a “senior member” of the management team, and was responsible for the day-to-day management and growth of the Gloucestershire Live website in her new role.

Jenny began her career on the Lincolnshire Echo in 2002 and moving to The Citizen as assistant editor and head of news in July 2008, following an eight-month stint as features writer and assisting commissioning editor at the Press Association in London.

Trinity Mirror has declined to comment on Jenny’s situation, but a 30-day consultation period with affected staff on began on Thursday.

On the same day, the company announced a digital rebrand of seven Midlands dailies, as well as the Bristol Post and Bath Chronicle.