A series of weekly newspapers have shut with the loss of around 20 jobs – less than six months after they were bought by a new owner.

The ‘View From’ series – which serve towns in Dorset, Devon and Somerset – has ceased publication with immediate effect due to “falling advertising revenue and the continued difficult trading climate”.

It is understood around 20 staff have been made redundant as a result.

The affected jobs are all based in Lyme Regis, while other editions cover Bridport, Dorchester, Weymouth, Axminster, Seaton, Honiton and South Somerset. 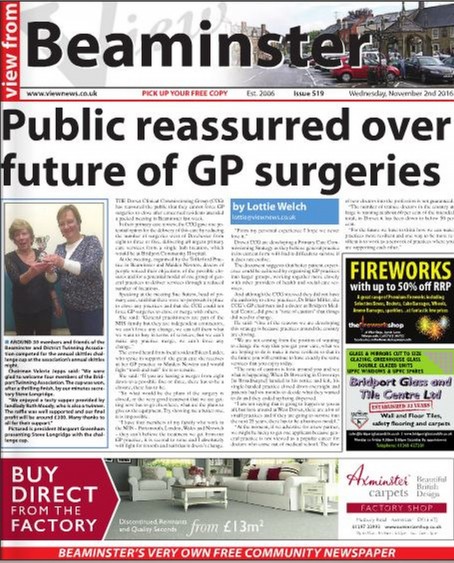 The titles, which had a combined weekly distribution of 33,000, were purchased by Truro City Football Club chairman Peter Masters in July last year, following his buyout of the Liskeard-based Sunday Independent earlier in 2017.

The Independent had ceased trading in April – eight months after the death of previous proprietor Brian Doel.

Capital Media had owned the ‘View From’ titles for 18 months prior to the July takeover, having previously acquired them from Tindle Newspapers in a management buyout.

Philip Evans, one of the leading shareholders in Capital Media, continued to run the View From titles, which he originally founded, following Mr Masters’ takeover.

Philip initially brought in former Western Daily Press editor Tim Dixon as operations director to help run the eight titles although he subsequently left the business and is now believed to be working in the Caribbean.

Said Philip: “It’s not been an easy decision. But having looked at this from every angle, the titles are just not viable in the current industry climate.”

‪A statement posted yesterday on the ‘View From’ Facebook page reads: “It is with great regret that the decision has been taken to close View From Newspapers with immediate effect due to falling advertising revenue and the continued difficult trading climate.

“Thank you to all our loyal readers & advertisers for your support over the past 12 years.‬”

A spokesman for the owners added: “Having acquired the titles out of administration in July of last year we agreed to continue publishing the loss-making titles for six months in a bid to give continued employment for the staff.

“But in the light of continued falling revenues, we have reluctantly decided that the titles are no longer sustainable.”