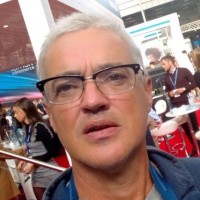 Journalists who lost their jobs when the weekly newspapers they worked for ceased publication are to receive money they are owed after a near-three-year fight.

Editorial staff who were employed at Lyme Regis-based View From Newspapers will now receive notice pay settlements and additional payments awarded by an employment tribunal after Duncan Williams, the final owner of the group, was declared bankrupt.

The money will be paid by the Insolvency Service after the Plymouth County Court ruling against Mr Williams, which means the government steps in to pay at least a proportion of what the former staff are owed.

Mr Williams, pictured, had bought the company for £1 on 16 January 2018, 12 days after 26 redundancies were announced at the View From series.

A previous hearing ruled he was liable for claims of staff still awaiting pay in lieu of notice, redundancy money and arrears of pay – rather than the papers’ previous owner Peter Masters.

Former deputy editor James Coles, who led both the staff’s tribunal claim and the bankruptcy petition against Mr Williams, said: “The amount of work to get to this stage, and receive what we’ve been entitled to for so long, was staggering.

“It’s a warning to anyone who believes, as an employee, they are genuinely protected by law in this country, just how easy it is for their employer to break these supposed rules.

“Mr Williams purchased the View From for the obligatory £1 in a deal which was obviously ‘too good to be true’, as it meant he took on the company’s debts, shortly after we had lost our jobs with barely a minute’s notice.”

At the end of 2019, the Insolvency Service made similar payments to those ex-employees who were due redundancy payments, following an employment tribunal judgment.

However, some staff had remained completely out of pocket until now, despite contributing hundreds of pounds in legal fees, because they had not been with the company for at least two years at the time of their dismissal.

Mr Masters remains the proprietor of the Cornwall-based Sunday Independent.

James said: “Masters was in charge when the plug was pulled on the company and jobs lost without notice or consultation.”

He added: “The responsibility passed to Williams when he handed over his one pound to take control of a business that was already as good as dead and buried.

“It was a sorry end to what was originally a great, family-run business, but at least my former colleagues and I can finally look forward to our severance pay, hopefully in time for Christmas. A rare positive for 2020.”

Mr Williams now lives and works in Elstree, Hertfordshire, and also serves as a voluntary area ambassador for Reach plc’s hyperlocal news service In Your Area.

He denies ever having lived at the address in Launceston, Cornwall, given in his bankruptcy order.

Mr Williams told HTFP: “Having successfully completed software and media technology development whilst working for View From Newspapers Ltd, it is confirmed that the print journalists working for the company have now received their redundancy pay.

“I am very pleased that my involvement with View From Newspapers was very far from wasted and that these technology innovations will be of lasting value to the fast-evolving hyperlocal regional news industries. This remains an important section of the wider news industry that I will always have an interest in and great deal of affection for.

“I hope that the former employees of View From Newspapers will share in this good news and of course the confirmation that their notice pay has been granted by the Insolvency Service.

“It was never my intention to deny any journalist their pay, I simply objected to the court’s decision to make me personally liable for these debts when these should have been shouldered by a limited liability company formation.

“I wish everyone well with their future careers, whether this be in print or digital journalism. We are living through a period of time where accurate and trusted news reporting has never been more important.”

HTFP has also approached Mr Masters for a comment.