A former regional daily editor has launched a new newspaper in a town whose weekly title closed at the start of the year.

Tim Dixon, who edited the Western Daily Press from 2010 to 2014, has announced the launch of The Paper for Honiton, which came out for the first time this week.

Tim has pledged the venture will be a “boost for local journalism” in the Devon town, which was served by the ‘View From’ series of weekly newspapers until they ceased publication in January.

He previously worked for the former owner of the ‘View From’ series, publisher Peter Masters, after being recruited to head up his editorial operation last year. 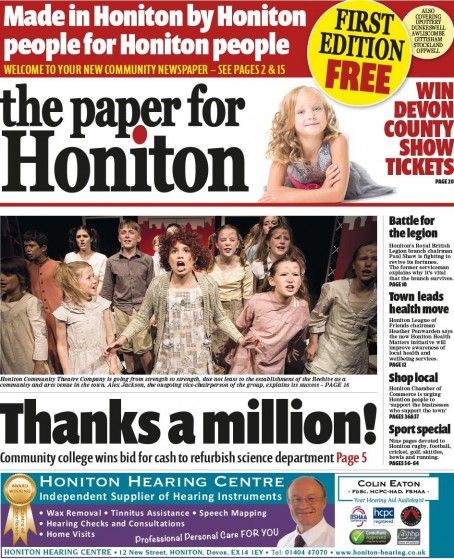 In a piece about The Paper’s launch on his Newscraft website, Tim wrote: “As the financial challenges faced by many local newspapers these days clearly illustrate, it is not easy to make a print newspaper viable – but it is most definitely possible. And I hope the paper for Honiton will prove that.

“But I believe we must find a different way to fund the paper if we are going to have a sustainable future serving the town and surrounding villages. That means three important things need to happen. The community must feel the newspaper is of value to them – a community asset.

“Everyone should be invited to be more closely involved in the running of their newspaper, enjoying greater access to it, helping to write it, produce it, check and verify it, distribute it and promote it. People should feel they own their local title and that it is working for their benefit.

“Readers should be prepared to pay a modest amount for their newspaper. Local print advertising alone is unlikely to sustain a title – and why should it be expected to on its own? That seems to place an unfair burden on local businesses.”

The Paper will be priced at 50p per week, while commercial enterprises are being asked to join a ‘supporters’ club’ and pay £5 per week to help cover the title’s print and production costs.

In return for this commitment, businesses will receive a free credit card-size advertisement every week and access to heavily discounted rates for any additional advertising they require.

Tim added: “We believe the paper for Honiton can play its part in reviving traditional local news reporting – but we will need Honiton to support us all the way.

“If you share our passion to make this newspaper a genuine force for good in Honiton, please make a donation to our ‘fighting fund’.”

Tim was originally brought in as operations director by Mr Masters last July following the latter’s purchase of the Liskeard-based Sunday Independent and the ‘View From’ series.

However he subsequently left the business before the View From closures in January.