The founder of a series of weekly newspapers which shut this month has launched a new website to fill a void left by their closure.

Philip Evans has founded LymeOnline to serve Lyme Regis after the seven-edition View From series, which was based in the town, ceased publication with the loss of more than 20 jobs.

The title will be edited by Philip’s daughter Francesca, 29, who worked as a reporter and sub-editor on the View From series, while a print edition is also being planned.

Philip founded the View From series 12 years ago and was later a shareholder in the titles which have now been sold to Poole-based entrepreneur Duncan Williams. 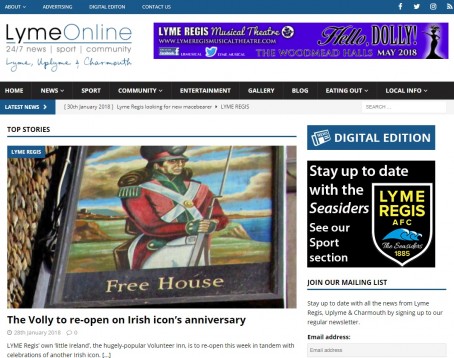 Both Philip and Francesca will contribute to the new website along with freelancer Geoff Baker and photographer Richard Austin, who were both given their first jobs in journalism by Philip.

He said: “The demise of the View From came as a great shock in the communities our titles served and we were amazed by the number of people who contacted us offering support if we were able to publish an alternative outlet for local news.

“It is our intention to sell advertising packages for the website and print version and it would seem that there is still a place for hyperlocal publications which provide comprehensive coverage of the towns they serve.

“The View From titles were very community focused. For example, every year we raised the money to pay for the Red Arrows’ display in Lyme Regis, the town’s biggest day of the year, and LymeOnline will continue with this policy.”

Added Francesca: “We constructed the website and went live within two weeks and we are delighted with the response.

“The website has attracted several thousand hits in the first few days and we are now working on our print version which will be delivered free to 4,000 homes in the area.”

Philip originally founded the View From series 12 years ago before selling it to Sir Ray Tindle.

He then bought them back as part of a consortium, Capital Media, that led a management buy-out of the titles along with the South London Press, before Sunday Independent owner Peter Masters took them over last July.

Poole-based entrepreneur Duncan Williams announced earlier this month he had struck a deal to buy the stricken titles, but has not yet indicated when they will return to publication.

LymeOnline will become part of Lyme Regis Media Limited, owned by Mr Evans, specialising in pre-press and editing services for other publishers.