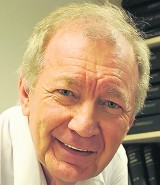 A group of local newspapers have been put up for sale with a plea for a larger publisher to take them over.

Peter Masters, owner of the Cornwall-based ‘Voice’ series of papers, has announced he is seeking to sell the portfolio by the end of next month.

Neither of those titles are currently being published, although both are described as “available” in any potential deal to be struck over the ‘Voice’ series.

Announcing his intention to sell, Mr Masters said: “The Voice Newspapers are on what can be described as a never-ending train journey and for me, it has arrived at the station where I get off.

“Along the way I have met many interesting characters and made some good friends, but nothing is forever and now is the time, as in my view, the Voices will benefit by being part of a larger publisher or a media company who are wishing to get into print.”

West Country businessman Mr Masters, pictured, entered the regional press industry in 2017 when he stepped in to save the closure-threatened Independent, which had been publishing for more than 200 years.

In the same year, he purchased the ‘View From’ series – which served towns in Dorset, Devon and Somerset – but they shut less than six months later, with 26 staff being made redundant.

The closure of ‘View From’ sparked a lengthy legal battle involving Duncan Williams, who had bought the company for £1 and was ultimately found to be liable, rather than Mr Masters, for the money owed to those affected.

However, publication of the Independent has been placed on hold since Christmas due to what was described as a “toxic mixture” of rising costs and the effects of the coronavirus pandemic.

Mr Masters has set a deadline of midday on 11 July 2022 for expressions of interest in the titles to be received, with the sale to be completed by 31 July this year.

All interested parties requiring information should in the first instance email prm@petermasters.co.uk stating their contact details and status.