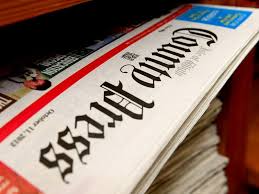 A regional publisher which took over a 133-year-old independent weekly in the summer is now seeking redundancies at the title.

Newsquest has confirmed it has opened a voluntary redundancy scheme at the Isle of Wight County Press, which it purchased in July.

The publishing giant has declined to say how many roles it is aiming to cut at the County Press, but HTFP understands that there have already been around 20 voluntary redundancy applications.

Around 70 staff are employed at the paper, of which around 18 are thought to be editorial staff.

The redundancy scheme is open to all staff except those currently employed in the paper’s advertising department.

The move comes shortly after the company announced earlier this month that it was promoting County Press editor Alan Marriott to the role of publisher.

A Newsquest spokesman said: “An announcement has been made at the Isle of Wight County Press inviting employees to apply for voluntary redundancy if they wish to do so.

“This is regrettable but forms part of our plan for the Isle of Wight County Press to have a sustainable future.”

Newsquest completed the buyout of the County Press in July after shareholders voted unanimously in favour of the move, despite calls by an island businessman, its MP and the National Union of Journalists for the deal to be delayed to allow an alternative local bid to be presented.

The County Press’s then chief executive Robin Freeman, who recommended the takeover, said at the time that “special arrangements would be put in place” to safeguard the “editorial independence and integrity” of the paper.

Andy Smith, newspapers organiser for the Nztional Union of Journalists, said: “If Newsquest have a plan for the County Press then they should share it with the staff so that the redundancy offer can be considered as part of a meaningful consultation over changes that will affect everyone.

“There is very real concern that the commercially valuable skills of journalists, some of whom who have worked at the County Press for decades, will be lost with the imposition of a one size fits all publishing model.”