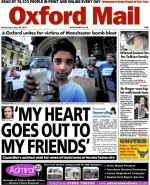 A total of 16 editorial jobs are under threat in a further series of cutbacks at Newsquest-owned newspaper titles announced to staff this week.

The past fortnight has seen a series of job loss announcements at Newsquest regional publishing centres including Bradford, Darlington, Gloucestershire and York.

Now it has emerged that five more roles are under threat at the Oxford Mail, three at the Lancashire Telegraph, one at the Bolton News, and seven at the group’s Wiltshire titles which include the Swindon Advertiser.

Ten of the 16 roles at risk across the four centres are newsdesk and content-editing positions as the publisher seeks to protect frontline reporting roles.

In Oxford, two senior content managers, a news content editor, a photojournalist and a deputy features editor are all under threat of redundancy.

In Wiltshire, the positions under threat include those of news editor, group web editor, three Swindon-based content managers, and a chief reporter and editorial assistant based in Trowbridge.

The Oxford and Wiltshire cutbacks were announced to staff yesterday in separate memos sent by Newsquest Oxfordshire and Wiltshire managing director Chris Moore, which have been seen by HoldtheFrontPage.

He said that while regrettable, the potential reductions meant the company could “continue to invest in frontline reporting roles.”

A sports writer role is at risk in the Bolton newsroom, responsible for the daily Bolton News and newly-launched weekly the Oldham Times.

The latest cutbacks at the two Lancashire titles follow a restructure in October which saw the deputy editors of both leave their roles.

Francesca Winrow, who had been largely responsible for running the LT’s day-to-day news operation while the paper was without an editor between 2015-17, left along with Lynn Ashwell of the News.

A Newsquest spokesman said: “We continue to look for ways to run our business more efficiently in order to ensure that our titles have a sustainable cost structure for the future.

“Due to advancements in technology, a strategic review of the Blackburn Editorial Department has placed the News Editor, Deputy News Editor and two Content Managers at risk of redundancy.

“However, we are proposing to create a new position for an Audience and Content Manager to support the introduction of new editorial workflows.

“Additionally, a strategic review of the Bolton Editorial Department has placed the role of a Sports Writer at risk of redundancy.

“Separate to this, there has been a strategic review of the Newsquest Oxfordshire & Wiltshire region’s editorial departments. This proposal places the following roles at risk of redundancy: the News Content Editor, Deputy Features Editor, Photojournalist and two Senior Content Managers in Oxford, the Group Web Editor, News Editor and three Content Managers at Swindon and a Chief Reporter and Editorial Assistant at Trowbridge.

“Whilst the potential redundancies are regrettable, it means we can continue to invest in front line reporters and content generators which are central to the continued success of our publishing business.”

One member of the Swindon reporting team, who asked not to be named, described yesterday’s announcement as a “huge blow.”

“We are a close-knit team and we’ve been hitting record digital figures in recent months while still managing to keep the inevitable decline in paper sales to a minimum,” he told HTFP.

“The axe appears to have fallen mainly on the production desk. The new technology the management refer to is an increased reliance on ‘write to shape’ software.

“That is fine for routine stories but we pride ourselves on our great supplements and features with their bespoke layouts and exciting presentation. It doesn’t appear that due consideration has been given to how we will continue to deliver these staples of our paper without a production desk.”