Eight more journalists working on Newsquest newspapers are at risk of redundancy, it has been announced.

Five newsdesk staff at the Bradford Telegraph & Argus are set to be cut to three, while three senior staff working on the Craven Herald and Ilkley Gazette will be reduced to two under proposals by the company.

It is the latest in a series of job cuts announcements made by the regional publisher in recent days, including four editorial job losses at Darlington and four in Gloucestershire.

In addition a voluntary redundancy scheme has been opened at the Isle of Wight County Press while 20 advertisement creation roles are also understood to be under threat in North Wales. 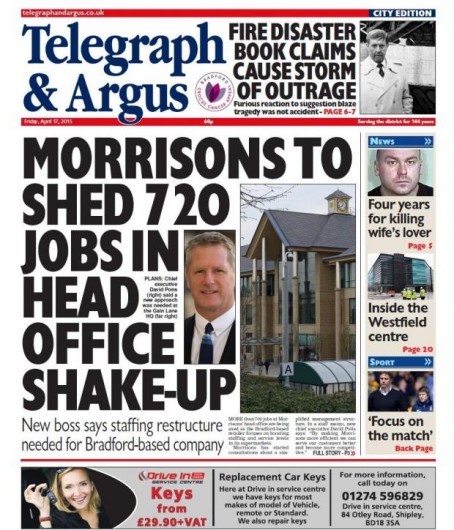 In October the head of Newsquest Bradford’s advertising operations, Sarah Kitson, left the company and Jane Hanson assumed responsibility for Bradford as advertisement director, in addition to her responsibilities with Newsquest in York.

Newsquest is currently consulting with its driving staff over the possible transfer of newspaper deliveries to Menzies, but no roles are at risk of redundancy as a result of this proposed transfer.

Newsquest has again insisted the announcements are individual business decisions taken locally, rather than part of an ongoing group-wide programme of cutbacks.

A spokesman for the company said: “We continue to look for ways to run our business more efficiently in order to ensure that our titles have a sustainable cost structure for the future.

“Due to advancements in technology, many of these efficiency savings will be made in content management and editorial production roles.

“Whilst this is regrettable, it means we can continue to invest in front line reporters and content generators which are central to the continued success of our publishing business.”

Yesterday HTFP reported that three newsdesk positions at the Northern Echo in Darlington will be reduced to one, while one of two copy editor roles working on associated weekly titles the Darlington & Stockton Times and the Despatch series is also under threat.