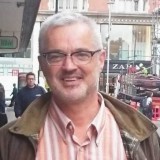 A media director who launched a crowdfunding bid to revive a series of closed weekly newspapers has struck a deal to buy them himself.

Duncan Williams, left, has told HTFP he has agreed the purchase of the ‘View From’ series after a meeting earlier this week with previous owner Peter Masters.

However Duncan was unable to give any indication as to when any of the Dorset, Devon and Somerset based titles would return to publication – or whether any of the 20 staff made redundant by the closure would get their jobs back.

He said an “accountants audit” would take place before any long-term decisions are made, although he says he has been in contact with former staff to reassure them that “everything is going to go through”.

The deal comes after Duncan launched a crowdfunding campaign to revive the titles after they ceased publication in the first week of the year.

He declined to say how much the deal was worth, although in his initial crowdfunding bid he had aimed to raise £85,000 by 3 March to buy the titles.

The series was previously based in Lyme Regis, but may now move to Poole where Duncan already runs an independent news and marketing service, the Poole Post.

Duncan, who is also a commercial development consultant with News Group Ltd and a director of Vibe Marketing, said he was still hopeful that a crowdfunding or community ownership option can be introduced.

He told HTFP: “People owning a share in their own local paper is a concept I believe could aid long-term growth. However, I am currently the majority stakeholder and am happy to do this so as to reassure people, not least my Dorset bank manager, that I am personally responsible for the success or failure of the relaunch.”

Asked whether he knew roughly how many of the staff made redundant might be taken back on again, he added: “I have not avoided talking with staff and have been totally straightforward by stating we need the outcome of an accountants audit until any long-term decisions can be made.”

“Obviously it wouldn’t be appropriate to announce this without first speaking with the people concerned.”

However Toby Granville, editorial development director of Newsquest which publishes the Dorset Echo, has urged View From journalists who lost their jobs to get in touch.

He tweeted on Friday: “We’re looking for talented multimedia news journalists and news editors at #Newsquest so anyone laid off at @BuzzFeedUK @ViewNewsUK looking for a job – get in touch!”

Duncan made clear that the View From titles would be getting new advertisement booking and online payment processing systems ahead of any relaunch, with Vibe Marketing pledging “long-term investment” in the upgrade.

He added: “Simply relying on selling ad space with old-fashioned hit and miss telesales cold calling is just not going to win us sufficient income. Since lack of advertising sales revenue has already been flagged up as one of the main causes of the newspaper group’s ills, making client account management as simple and yet value effective as possible for small and medium-sized enterprises is going to be vital to our success.”