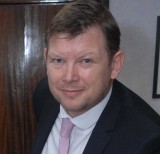 The editor of England’s biggest selling regional daily is leaving the newspaper after five years in charge and 25 years with its parent company.

Midlands News Association has announced Keith Harrison, who has edited Wolverhampton daily the Express & Star since 2013, is leaving the business.

Keith first joined the MNA as a senior reporter in 1993, and edited the Shropshire Star for two years prior to taking on the top job in Wolverhampton.

The company says a decision on Keith’s successor will be made in due course.

In a statement, Keith said he was leaving the company “with great sadness”, but added he felt it was “now time for a new challenge.”

He added: “It has been a privilege to serve the company in numerous roles, particularly in 2011 when I had the honour of editing the Shropshire Star, and since 2013 as Editor of the Express & Star.

“In that time, it has been great to see our efforts as a team rewarded with various awards for our campaigning, our website and the overall quality of our work.

“It has been fantastic to work with so many talented journalists down the years and to have learned from some of the best in the industry. I would like to thank my colleagues past and present for their help and pay particular tribute to the Graham family for their unstinting support.

“The Express & Star is a special title in a special part of the country. It will always have a huge place in my heart and I wish it every success in the future.

“It has been an honour and a privilege to be part of this fantastic organisation and I’ve loved every minute. I wouldn’t have missed it for the world.”

In August 2018’s ABC results, the Express & Star recorded a circulation of 42,208, the highest of any English regional newspaper.

MNA print managing director Graeme Clifford said: “On behalf of the MNA, I would like to thank Keith for his contribution during one of the most challenging periods in the history of our industry.

“Amid significant upheaval for regional news publishing, Keith has proved to be first a formidable journalist and then a highly capable editor.

“Keith has led the editorial team with great energy and leadership, building upon the MNA’s heritage for first rate local news coverage.”