The deputy editor of a regional daily is among five staff now confirmed to have left the newspaper following a restructure which also saw its editor depart.

The Midland News Association has announced that Diane Davies has left Wolverhampton daily the Express & Star, along with its Weekend supplement deputy editor Lisa Harrison and editor’s secretary Karen Baker.

HTFP has previously reported that editor Keith Harrison was stepping down after five years in charge and 25 years at the Wolverhampton-based title.

Business editor Simon Penfold also left the E&S after 24 years on Friday, and the MNA has now confirmed the departures of Diane, Lisa and Karen in a piece on its website. 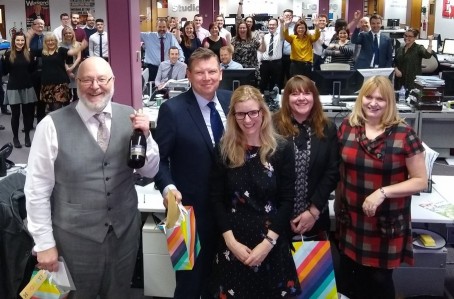 At the time that Keith’s departure was announced, the MNA refused to comment on whether Diane and Simon would also be leaving the newspaper, following enquiries by HTFP.

Simon’s departure was later confirmed by the company, but Diane’s has only been officially announced today.

The MNA has also announced that former Shropshire Star deputy editor Mark Drew will become deputy editor for the group, while John Corser will take over from Simon on the business desk.

As previously reported, Shropshire Star editor Martin Wright has been appointed to the role of editor of the Express & Star and edior-in-chief of the Midland News Association as a result of Keith’s departure.

“I have spoken to editorial staff in a series of meetings and one-to-one discussions and I am relishing the opportunity of working with such a talented team of journalists.

“The Express & Star and Shropshire Star have a superb heritage for reporting on local life and leading the way in making a positive difference in the communities we serve. I want to build on our reputation as the leading newspaper brands in our areas.”

He added: “The five colleagues who departed last week leave with our best wishes for the future.”