A regional daily editor about to step down from his role after five years in charge was able to savour a final awards triumph on Friday as his title was named newspaper of the year for its patch.

Wolverhampton daily the Express & Star was the big winner at the Midlands Media Awards with wins in four categories.

It meant a valedictory triumph for editor Keith Harrison, who is stepping down as editor after 25 years with parent company MNA Media.

Keith, who will be succeeded by Shropshire Star editor Martin Wright, is pictured with the newspaper of the year trophy below. 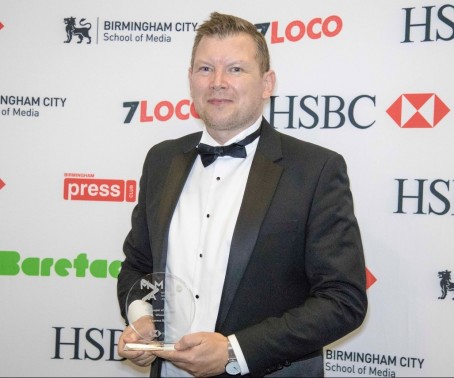 The newspaper of the year crown was one of four awards for the paper at Friday’s annual event, organised by Birmingham Press Club and held at Edgbaston Stadium.

Judges praised the paper’s “impressive story count, both in news and sport, and in-depth coverage – particularly their analysis of the West Midlands crime survey.

“If content is king, then the Express and Star takes this year’s crown as Newspaper of the Year,” they added.

Commenting on the entries in general, chairman of the judging panel Laurie Upshon praised the contribution being made to the region’s media by the newly-appointed BBC local democracy reporters.

“What came through, when we were judging entries, was the great diversity of style and content, reflecting the special – and unique – characteristics of the different cities, towns and villages in our patch. Our newspapers, in particular, highlight those differences,” he said.

“It is localness that makes them such a vital part of their communities and, despite economic pressures, they still must play a vital role in the democratic process to ensure those with power are subject to essential scrutiny.

“And so it was particularly pleasing to see, this year, the prominent contribution in many of the papers of the local democracy reporters.”

Blogger/Columnist of the Year (including hyperlocals) – Gabrielle Miller, Cool as Leicester.

Campaign of the Year – BBC WM. “Make A Difference.”

Newspaper of the Year – Express & Star.