Dyson at Large: Johnston Press journalists are the regional heroes of 2018

Don’t worry: I’m not about to applaud the old or new bosses at what was Johnston Press before its swift metamorphosis through administration into JPIMedia last month.

After all, it was the former chiefs’ eyes of corporate expansion being far too big for their financial bellies that landed the company in such a financial mess in the first place.

And the latest bosses still have loads of questions to answer and points to prove in the new year, not least about sacrificing the company’s pension scheme.

But what did impress me during what must have been such a traumatic weekend last month was the great professionalism shown by frontline hacks at Johnston Press in the face of potentially life-changing events.

Take Tom Earnshaw, for instance, a young reporter on the Lancashire Evening Post and Chorley Guardian, tweeting just after 9am on the Saturday morning after the Friday announcement of administration. On a Twitter trail of local reaction to the news, the Johnston Press hack simply announced:

“I’m working the weekend shift … [and] I’ve had my shorthand pad out since 7am, making calls, following up on potential leads. We carry on and do what we do best.”

In the maelstrom of social media emotion on the story, it was that calm post from Tom’s @TREarnshaw handle that made me shout: “That’s the spirit!”

As the morning progressed, Johnston Press staff became more questioning, and I loved the public warning from David Nowell, the business editor at the Lancashire Evening Post, who tweets from @lepdavidnowell.

“No jobs lost. Yet. No papers shut. Yet. Hopefully papers like the Post and Gazette will carry on being produced by dedicated, overworked and understaffed journalists like me. I have already lost a chunk of my pension. Does anyone seriously think it will end there?”

This prompted another exclamation from me – “You tell them!” – and I’m sure any of David’s bosses who saw the tweet will agree he exemplifies the sort of intelligent, challenging staff the regional media needs.

There were many other notable posts from rank and file Johnston Press journalists, and so Tom and David are picking up a joint heroes’ award on behalf of them all.

Meanwhile, James Mitchinson, editor of The Yorkshire Post, picks up a similar shared hero status on behalf of so many Johnston Press editors whose calls to arms made you want to be one of their troops during the 24-hour crisis.

Tweeting from @jaymitchinson at 8.14am on the fateful Saturday, along with a picture of that day’s front page, James said: 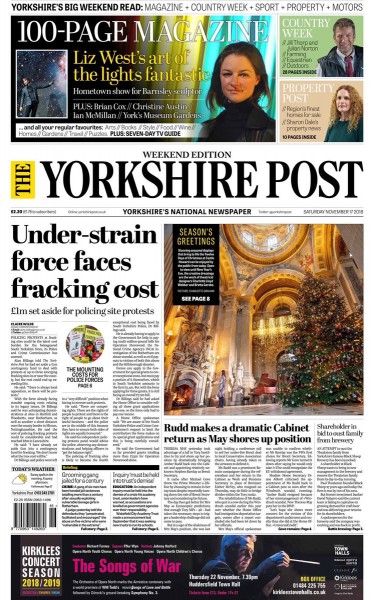 I loved it, as I did 891 people who liked James’ post, which also attracted 244 retweets and 38 comments.

He continued the momentum, answering many comments personally and keeping us updated and inspired all day long – as did various other Johnston Press editors.

Leading them all was Jeremy Clifford, editor-in-chief at the company, who also gets a hero award from me for the way he consistently reassured his teams, customers and readers. This began with a post from Jeremy’s @EditorInChiefJP Twitter handle at 6.53am on Saturday 17 November:

“Appreciate the concern about @Johnston_Press. Don’t forget we’re being told no jobs or titles lost as a result of this transaction. CEO David King’s email to staff worth a read. Reassuring and insightful. [link to email].”

“For those who may have missed it. [link to King’s email]. One thing you could all do today to demonstrate to the people who may buy our company they are making a great investment and for that matter any other media business – go out and buy your local newspaper @Johnston_Press.”

Many more tweets and responses to sometimes angry comments came from Jeremy, and by 3.40pm he was able to post the following …

“It’s been quite a journey to get to where we are today & a new company JPIMedia. Our editorial values stay the same Our great team of journalists will continue to bring you the news on all platforms. I thank them for what they do, day in, day out – especially during past 24 hours”

Some might say that this is simply a company man with a corporate message, but I think it takes guts to be prepared to instantly comment on a breaking news situation about your own employer, and the way Jeremy stepped up to the plate undoubtedly kept staff morale up.

While the above four Johnston Press hacks dominate my top ten list of regional heroes in 2018, there are another six who all caught my attention.

The first was Jim Levack, a former Birmingham Mail news editor in my days at the paper and now a freelance football writer, for his public castigation of Reach’s decision to not always attend every match of the clubs it covers.

Thanks to Jim’s passionate calling out of what he felt was wrong, Reach was prompted to defend its policy in numerous long blogs, leading to a full debate about why it was doing this, and what it might do better instead.

Another hero award goes to Jen Williams, politics and investigations editor at the Manchester Evening News, who stuck up for the way regional titles pursue public interest journalism in a heated Twitter debate with national motormouth Owen Jones.

I often agree with much of what Owen says but he was wrong on this occasion not to exclude regionals from his tirade against journalism, and I’ve never seen him so swiftly silenced.

A dual award deservedly goes to Joanne Butcher, chief executive of the NCTJ, and David Higgerson, digital editorial strategy director at Reach, who together have created and led a project that will see Facebook fund $6m worth of training and employment for 80 new community journalists for towns without local newspapers.

This is one of the most positive developments for regional journalism in years and the first time private digital media giants have ever considered serious investment to help the sector’s survival.

One of the most influential media figures who called for such funding was Harry Evans, who edited the Northern Echo in the 1960s and went on to be one of the world’s leading editors.

Harry’s always been one of my media heroes, and at the grand old age of 90 he gets my formal award for pointing out that social media giants lack accountability and make no financial contribution to the industry … although this started to change just a few weeks after his comments.

My final award for 2018 goes to Tamara Siddiqui, the newly-qualified senior journalist on The News, Portsmouth, who scooped three out of the four awards for best paper in the NCTJ’s latest National Qualification in Journalism exams.

Tamara got the top marks in the media law and practice, news report and e-logbook sections of the exam, with her news report described by examiners as one of the best they’d seen for many years. She’s one to watch for the future…

Meanwhile, many thanks to all HoldtheFrontPage readers for visiting and commenting on my blogs in 2018. Merry Christmas, everyone, and a happy new year.