Legendary former editor Sir Harold Evans has declared that local journalism “must and will” survive – but called for reforms to ensure it is properly funded.

In an interview for the BBC which has also been carried in his old paper, Sir Harry described local news as “an essential part of democracy.”

Sir Harry, who celebrated his 90th birthday in June, was interviewed by fellow former Echo editor Peter Barron for a BBC documentary on local newspapers which aired in certain regions last night.

A write-up of the interview also appeared in today’s edition of the Darlington-based daily, which Sir Harry edited from 1961 to 1967 before leaving to edit The Sunday Times. 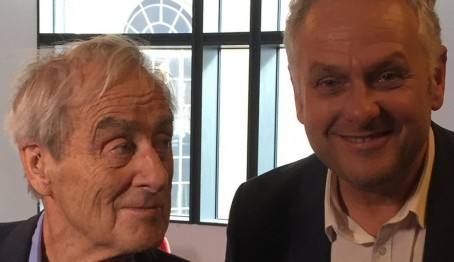 Sir Harry told Peter: “Local journalism is absolutely vital. It must – and will survive, I’m sure of it, because it is such an essential part of democracy.

“But there must be reform to ensure it can be properly funded.”

He went on to argue that some of that funding should come from social media giants, who he claimed lacked accountability and made no financial contribution to the industry.

“Local newspapers also play a vital role in training journalists and they are more trusted and accountable because of their unique connection to communities,” he added.

Sir Harry began his career as a 16-year-old reporter on a weekly newspaper in Ashton-under-Lyne before going on to become assistant editor on the Manchester Evening News and editor of the Echo.

While in Darlington he ran a successful campaign to establish cervical cancer testing on the NHS and won a posthumous pardon for Timothy Evans, who was falsely convicted and hanged for the murder of his wife and baby daughter at 10 Rillington Place in London.

Wrote Peter: “It has been a privilege to meet Sir Harold Evans twice before but the third encounter in London last week was perhaps the most inspiring yet.

“Call me Harry,” he said when I greeted him at BBC Television Centre. “How’s my old paper?”

“He meant The Northern Echo, of course, where he made his name as editor in the 1960s and set the bar so high that none of us who followed could ever hope to reach it.

“It will always be Sir Harry’s Northern Echo to a very significant degree, and it was again a privilege to see that the whirlwind shows no sign of stopping.”

* The documentary aired on BBC 1 in certain regions at 7.30pm last night as part of the Inside Out series.  It can be viewed here on iPlayer.