Dyson at Large: The importance of attending local football matches

Have you caught up on Britain’s biggest regional publisher’s justification for not attending a long series of scheduled major events it regularly reports on?

His comments came after Jim Levack, a former regional journalist, made media headlines earlier this month with his vehement reproach of the publisher for not sending reporters to watch Championship-topping Brentford FC at Griffin Park. 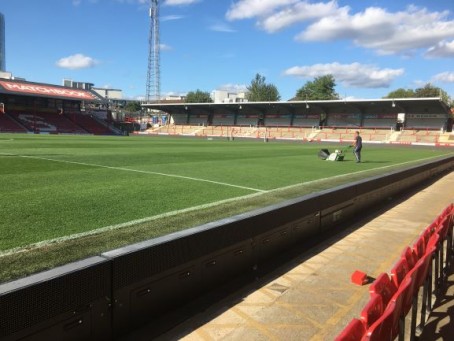 Jim’s critique on beesotted.com – a Brentford fanzine – has been well-aired, but here’s a soundbite: “For the first time in the club’s professional league existence there was no local media representation at the game [Brentford 5, Rotherham 1, Saturday 4 August] … a damning indictment of the lack of investment in local and regional media …”

Here’s a snippet from David’s riposte on his own blog site last week: “[T]here are many more places to get live match coverage than in the past … [for example] agencies are in the ground, providing copy. It’s never been easier to follow a match … [T]he idea that being sat in the press box is an indicator of ability to uncover big stories at a football club, or show real passion in coverage, has been debunked time and again …”

If you’ve read the above views in full, you’ll probably have an opinion. Before I give you mine, you should know that as a former Trinity Mirror journalist I once worked with, still like and have respect for both Jim and David.

But on this row, I reckon Jim’s comments – while maybe a little over-excited – were mainly right: a newspaper or website surely can’t claim to fully understand and analyse a football club without a reporter regularly attending their matches.

Why not? Because without sharing the most important moments with the fans, and without its own insight on those moments for fans not present, a local newspaper or website lacks credibility and struggles to be authentic.

Most football fans snort – literally – at anyone trying to comment on their club’s latest performance but who wasn’t at the match.

To paraphrase a recent rant I overheard: “You say that [about a match controversy], but were you there? Were you? Er, no, thank you. And I was. I saw it live, real time, not selectively, not in slow motion from above, it was there in front of my eyes.

“It happened 30 metres away from where I was stood. I saw exactly what happened. I felt the reaction of 20,000 people, argued it out and agreed it there on the spot in five seconds flat, witnessed the afters, the players’ faces, heard them screaming – the whole thing. And you didn’t.”

The above type of blast – repeated in passionate conversations around the UK every week of the football season – reminded me of a more moving, 290-odd word description of the importance of the live match tapped out by JB Priestley in Good Companions in 1929, which you can find online here courtesy of popular culture blogger Martin Johnes.

To give you a taste, Priestley wrote that spending a shilling to pass through the turnstile “… turned you into a critic happy in your judgement of fine points … a partisan … elated, downcast, bitter, triumphant by turns at the fortunes of your side … thumping one another on the shoulders, swopping judgements, like lords of the earth …”

He added: “Moreover it offered you more than a shilling’s worth of material for talk during the rest of the week. A man who had missed the last home match of ‘t’United’ had to enter social life on tiptoe …”

On tiptoe indeed. Imagine the opinion of an average football fan upon realising that a reporter writing about their team’s latest lows hadn’t even been at the match.

Let’s leave football aside for a moment: what does David’s defence of not having to be at the main scene of the story mean for regional journalism in the wider sense?

Perhaps there’s no need to send reporters to cover important local council meetings, instead relying on what politicians tell us was decided and why.

Or maybe major court cases can be reported with no impartial journalists present, the media instead asking barristers, witnesses or the accused for their post-hearing accounts of what happened.

Apply the same thinking on a global scale: what on earth would history be reporting if  the BBC’s Kate Adie hadn’t been on the spot during the Tiananmen Square protests in China in 1989?

Does that extreme example turn the argument on its head? Well for me, it’s that basic: serious journalism requires a reporter’s attendance at the main story, and readers would be shocked and disgusted if they found out that wasn’t taking place.

Back to football: the matches played by big local teams are not only among the main local stories, they are events which prompt pages of comment all week, and fans should be able to expect that the media they’re reading were present.

No-one’s saying – as David seems to imply – that reporters are only there to produce traditional match reports: they can and should be using their time at the ground to gather other stories, after-match interviews and fans’ views, off-diary exclusives and interesting data from top contacts and online interaction.

Yes: there are sometimes resource issues, and it’s arguably acceptable for a publisher with local titles in both Leicester and Liverpool – for example – to send one reporter to cover the home and away angles of Leicester City v Everton.

And it’s understandable if a sudden illness or last-minute absence occasionally results in a title having to borrow agency reports for its coverage of a big local match. Very occasionally, mind.

But it’s indefensible for publishers claiming to cover big local clubs to not even plan to send reporters to home matches, and it nullifies any serious claim to an independent view on how the team’s playing.

One more thing: David tries to turn the quarrel into a print versus online, traditional versus modern journalism issue, and I believe that’s disingenuous.

Performing good, thorough journalism has nothing to do with whether you’re reporting for a newspaper, website, radio or TV station: it’s about witnessing the main story whenever possible for your audience, resulting in fair, accurate reports and the ability to tell local readers that you were there.