An MP has resigned as a local newspaper columnist after refusing to write about the Downing Street parties scandal.

HTFP reported last week how the Bishop’s Stortford Independent, declined to carry Tory MP Julie Marson’s usual fortnightly column when she ignored his request for its subject to be so-called ‘PartyGate’.

Now the Independent has confirmed Mrs Marson has decided not to continue her column, telling the paper there are “other ways I can communicate with my constituents”.

Editor Paul Winspear received the message after contacting the Hertford and Stortford MP on Monday to ask whether he could expect her fortnightly column first thing the following morning, as scheduled. 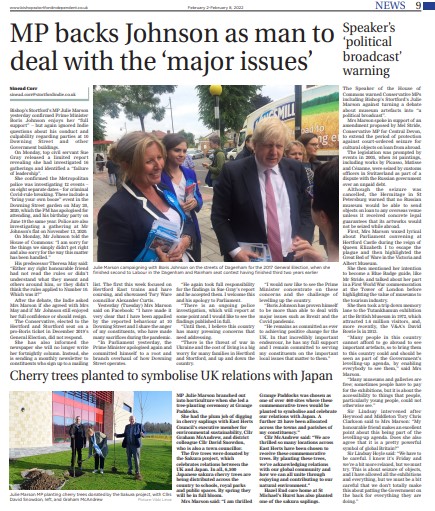 The Independent devoted a full page of this week’s edition to stories involving Mrs Marson, pictured below, including a story about her defence of Boris Johnson over the scandal.

The page also featured a piece about a warning the MP had received from Sir Lindsay Hoyle, Speaker of the House of Commons, against turning a debate about museum artefacts into “a political broadcast”, and another about a tree-planting ceremony she attended.

Paul told HTFP: “We will continue to keep readers abreast of news involving our MP, as we always have.”

Mrs Marson’s row with the Independent began when she submitted a column on the subjects of train services and hare coursing, rather than complying with Paul’s request for a piece on ‘PartyGate’.

The paper declined to publish the submitted column, instead printing an editorial explaining why it had not been run.

A member of Mrs Marson’s staff had claimed in an email that it was “normal local newspaper industry rules” for columnists “to decide what to write about” and the MP later launched a public attack on Paul over the issue.

Mrs Marson’s office has not responded to HTFP’s request for a comment on her decision to end the column.