An editor has urged politicians to “follow Boris Johnson’s lead” in visiting regional newsrooms after meeting the embattled Prime Minister at his newspaper’s office.

Richard Duggan, who edits the Bolton News, called on MPs to “make the effort to work closely with local news brands” following a visit by the PM to the Newsquest-owned daily’s headquarters last night.

In an exclusive interview with the News, Mr Johnson pledged to give his backing to Bolton’s ‘levelling up’ bids – including a planned new medical college and a renewed redevelopment bid in the town.

The PM’s visit came on the day his government unveiled its ‘levelling-up’ White Paper, while other regional press titles continued to seek answers from their local Tory MPs about the future of his leadership. 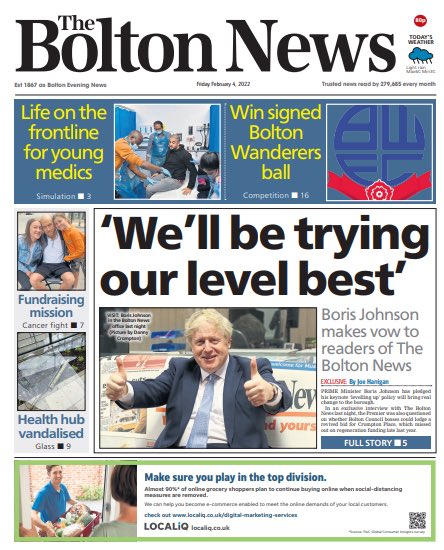 The News splashed this morning on Mr Johnson’s visit

Speaking to HTFP, Richard said: “Whatever your political views, a visit from the current Prime Minister to a local newsroom is always an exciting moment.

“We were pleased to have the opportunity to directly question Mr Johnson about what levelling up really means for local people in Bolton and the wider area. I hope other politicians follow his lead and make the effort to work closely with local news brands.”

However regional press titles have enjoyed mixed successive in seeking answers from Tory MPs about their views on the ‘Partygate’ scandal and whether they would be submitting a letter of no confidence in Mr Johnson.

Edd Moore, editor Plymouth Live, posted on Twitter:  “We asked Plymouth MP Johnny Mercer why he had chosen not to comment on the matter. He replied ‘Ha Ha.'”

However, James revealed on the social media site that he has received just three responses so far – from Kevin Hollinrake, Julian Sturdy and David Davis.

James wrote: “It remains to be seen if today’s resignations by senior Downing St advisors prompt additional responses to my letter, asking Yorkshire’s Tory MPs quite simply: do you still support the Prime Minister?

“As promised, we will share replies in Saturday’ paper and online. Three so far.”

HTFP reported yesterday how Hertford and Stortford MP Julie Marson had resigned as a columnist with the Bishop’s Stortford Independent after refusing to write about the Partygate scandal, as requested by editor Paul Winspear.

And Maidenhead Advertiser editor James Preston has also urged MPs to come clean on their views about ‘PartyGate’ after his paper revealed former Prime Minister Theresa May’s thoughts on the issue.