An editor has defended his decision to spike an MP’s regular column after she refused to write about the Downing Street parties scandal.

Paul Winspear, who edits the Bishop’s Stortford Independent, declined to carry Tory MP Julie Marson’s usual fortnightly column when she ignored his request for its subject to be so-called ‘PartyGate’.

Mrs Marson instead submitted a column on the subjects of train services and hare coursing, which the Independent declined to publish in Wednesday’s edition.

In the column’s place, the paper ran an editorial explaining why the Hertford and Stortford MP’s piece had not been run which contained extracts from an email sent by Mrs Marson’s office to Paul. 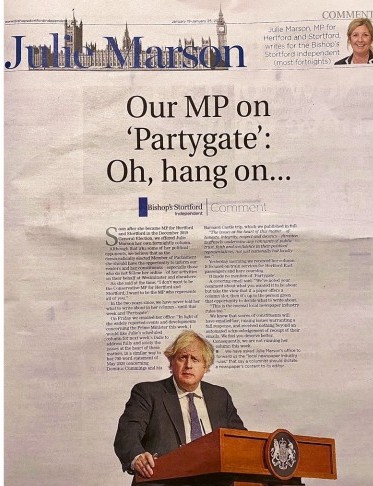 The Independent’s editorial on the spiked column

In the email, Mrs Marson claimed it was “normal local newspaper industry rules” for columnists “to decide what to write about”.

The Independent’s decision prompted Mrs Marson to launch a public attack on Paul, posting on Twitter: “Women didn’t get the vote and go into Parliament to be dictated to by anyone, including newspaper editors. Try and get it right next time.”

She further accused Paul of ‘mansplaining’ and demanded a correction to what she claimed was an inaccuracy in the editorial about the Independent’s claim to have “never told her what to write about in her column”.

Paul subsequently addressed the second issue in a statement on the paper’s Facebook page.

He wrote: “In the two years that the Indie has been offering Julie Marson MP a fortnightly platform for an unedited 900-word column, PartyGate is the second, not the first, time we have directed her – as we similarly do with our other columnists – to address a burning issue.

“We are grateful to her for highlighting the fact that the first time she would not be directed on addressing a burning issue related to her voting against feeding hungry schoolchildren in holidays. ”

Paul told HTFP he was “really bamboozled” by the situation.

He said: “It’s one of those situations where our readers, Facebook and Twitter followers, said it all for us. It’s a spectacularly misjudged overreaction by [Mrs Marson’s staff] to a not unreasonable request by me.”

HTFP has since approached Mrs Marson to ask for clarification on which “normal local newspaper industry rules” her office was referring to, regarding columnists deciding the content they write about

In response, she said in a statement: “I asked my MP colleagues all over the country if local papers ever demanded what they must write about and the answer was no.

“So the normal state of affairs is MPs are free to write on whatever topic they choose. It may be an unwritten rule, but it’s what is happening right now across the country.

“The editor of the Bishop’s Stortford Independent refused to carry my regular column last week because I would not be dictated to over what I should write.

“I have already made two statements on events in Downing Street and I find it almost laughably ironic that he complains about a lack of comment whilst simultaneously quoting from my statement on the front page of his own paper.

“I don’t think this kind of argument does anything to help the people I represent although it might be a useful source of clickbait for the editor.”

Mrs Marson went on to describe local news reporting as “a valuable platform to shine a light on issues affecting local people, to raise awareness for community activity and of course to hold local public figures like me to account”.

She added: “I will not be distracted from doing my job, which is standing up for the people of Hertford and Stortford on pressing issues affecting their lives, such as the cost of living, and trying to represent them to the best of my ability.”

HTFP understands no decision has yet been made on the future of Mrs Marson’s column in the Independent.