Newspapers have continued to attack Boris Johnson over the Downing Street party scandal after one editor declared the Prime Minister is “no longer welcome” at the regional daily he runs.

James Mitchinson revealed on Friday the Prime Minister will not be invited to “address gatherings convened by the Yorkshire Post” after further revelations emerged about parties at Downing Street during the coronavirus lockdowns.

And yesterday, pro-Scottish independence title the Sunday National turned Mr Johnson’s election-winning slogan of ‘Get Brexit Done’ against him.

The Newsquest-owned newspaper ran with ‘Get Exit Done’ after a poll found the majority of Scottish people think the PM should resign over the matter. 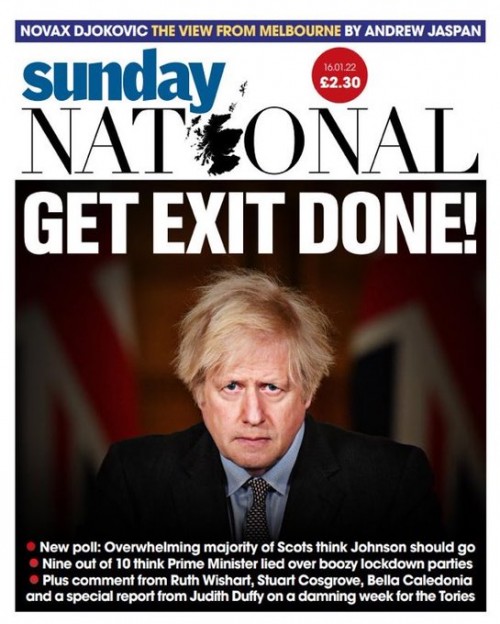 Since he began as editor of the historically Tory-supporting Post in 2016, James has welcomed serving Prime Ministers David Cameron, Theresa May and Mr Johnson to its Leeds headquarters.

But HTFP reported last week how he had expressed his hatred for the current Government – branding them “self-serving pigs” in the wake of the scandal.

Since then, Mr Johnson has resisted calls to resign as further revelations about parties held at Number 10 have become public.

Posting on Twitter on Thursday night, James wrote: “On several occasions I have written to Prime Ministers inviting them to address gatherings convened by the Yorkshire Post.

“David Cameron, Theresa May and Boris Johnson have all been good enough to accept.

“However, I want to make public that Boris Johnson is no longer welcome. PM or not.”

The Leeds-based Post, now part of JPIMedia but once owned by Yorkshire Conservative Newspapers, previously urged Mr Johnson to resign over the scandal last month.