Publisher Reach plc has announced the new team for what it is calling its “largest digital launch yet” after hiring 12 new journalists.

Yorkshire Live will see the company expands its existing digital footprint from its LeedsLive and Huddersfield-based ExaminerLive portals into Sheffield, Bradford and North Yorkshire – patches traditionally served by other publishers.

It has recruited 12 new journalists specifically for the launch, alongside the six already employed by LeedsLive and the 12 digital journalists at the Examiner’s offices.

The site will include dedicated news channels for South Yorkshire, North Yorkshire and Bradford, and will work closely with the HullLive team, ensuring full coverage of the county across the three historic ‘Ridings.’

YorkshireLive’s launch editor will be Chris Sherrard, who is also Reach’s editor-in-chief digital in the North of England, while Huddersfield Examiner editor Wayne Ankers will now additionally serve as head of news for Yorkshire Live in an extended remit.

He said: “Yorkshire is such an exciting county with so many interesting towns and cities. We want to cover all that is great about the people and places of the county in an interesting and engaging way.

“We’re excited about the team that we have built for Yorkshire Live and look forward to building a deep and meaningful connection with the readers.” 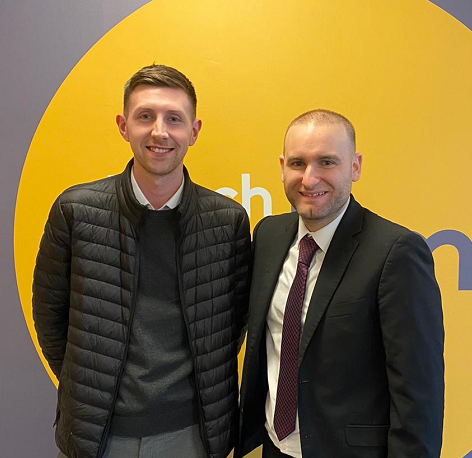 Among the new hires are football writers Dominic Howson and Ricky Charlesworth, pictured above, who both join from the Sheffield Star, with Nathan Hemmingham recruited from HullLive to become the site’s Sheffield United correspondent.

They will report to head of football for Yorkshire and Lancashire, Tom-Marshall Bailey.

A new office will open in Sheffield alongside the Leeds and Huddersfield offices with a five-strong team, led by Fay Preston, who has joined from HullLive.

Fay, pictured below left, will be supported by (from left) chief reporter Alex Grove, also from HullLive, trainee Phoebe Fuller, Danielle Hoe from LincolnshireLive and Paul Whitehouse, a former district chief reporte for the Yorkshire Post. 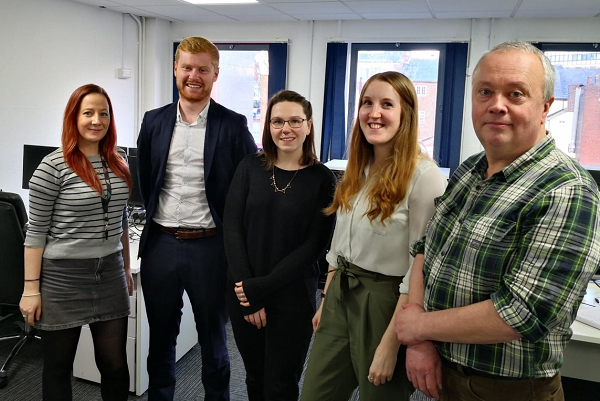 The SouthYorkshireLive team in the Sheffield newsroom

The North Yorkshire team will comprise of Charles Gray, who joins from the Sandbach Chronicle series, and Victoria Scheer, formerly with Iliffe in Norfolk.

And the reporting team for MyBradford will be led by two current Examiner journalists, Andrew Robinson and Ben Abbiss.

He said: “This is an exciting time for journalism in Yorkshire. Three new websites, 12 new journalists, a new office in Sheffield and more resources in Leeds. That sort of positive investment does not happen very often.

“It is always special to be involved in launches and it is extra special when it happens in God’s Own Country. Yorkshire Live is the biggest of the Reach Live projects and the team led by Chris is determined to deliver great news and sports stories from all corners of the county.

“They are loving the experience and the enthusiasm and talent already being demonstrated augurs well for the future. This will be fun!”

Reach has now hired almost 50 new journalists since the start of the year as it looks to build on a successful 2019 for audience growth.

David Higgerson, Reach plc’s chief audience officer, said: “We launched into Leeds three years ago and the team have shown we can build a loyal audience by doing local journalism differently, as we already were doing in Huddersfield.

“The launch of YorkshireLive is really exciting, and we’re delighted to be able to add so many extra journalists to an already strong team in Yorkshire.”