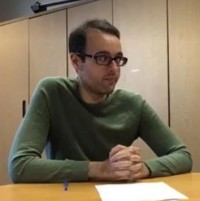 Football clubs have been warned they are in danger of putting regional press jobs at risk after a string of access rows involving local sports reporters.

Tom Scargill, who covers Halifax Town for the Halifax Courier, and Leigh Curtis, who reports on Notts County for the Nottingham Post, have both hit out after facing access issues at away matches in the past week.

Tom, pictured, has now called for new regulations guaranteeing the right of admission for local sports reporters to all games and warned clubs they are in danger of putting regional press jobs at risk because of the reduced amount of coverage journalists can give as a result of them being barred from stadiums.

Tom’s warning comes after he was refused access to Town’s National League game at Weymouth FC on Saturday after the home club claimed there was “very limited availability of space” due to the game being televised, while Leigh was initially being denied a press pass to attend County’s game against Dagenham & Redbridge in the same division on Tuesday.

The decision was later reversed after the matter was raised with Dagenham’s media manager, but Leigh has warned “many journalists” are facing similar problems at present.

The rows come after HTFP reported last month how Chris Phillips, chief sports reporter at Essex daily The Echo, had been refused access to Boreham Wood, another National League side, for their FA Cup tie against Southend United after match reports were deemed “non-essential” by the home club.

Tom told HTFP: “It’s not the first time this season I have had obstacles placed in front of me trying to just do my job by reporting on the team at away grounds.

“But on this occasion, unfortunately, there was no way round the issue and I have been denied access, which I feel incredibly frustrated about.

“I know of other reporters at this level who have faced similar situations and I feel this needs to be stamped out of the game at all levels, and the authorities – be it the leagues or the Football Association – need to impose some kind of regulation that all local newspaper reporters should be admitted to all games.

“After all, we follow our clubs home and away, and have a loyal readership who rely on us to cover their club in an impartial, objective way.”

Tom went on to warn such issues could have a knock-on effect in terms of job cuts in the industry.

He said: “If we start to find more and more instances where we are denied access to games, this sets a dangerous precedent and begins to get into the realm of putting our jobs at risk if the number of games we can cover decreases.

“There are a lot of pressures on football reporters as it is in terms of maintaining the level of coverage we provide without certain clubs adding to that. I must say, the vast majority of clubs are brilliant and try to accommodate you, but more needs to be done to help reporters with those clubs who put barriers in the way.

“I understand safety during Covid is crucial but often it is a case of asking for one seat anywhere in the ground and I find it completely baffling and frankly unacceptable that these requests cannot be met.

“Local newspapers provide daily or weekly coverage and exposure of local clubs that they simply do not get elsewhere at National League level, yet in this case, it appears that the needs of a national broadcaster have been prioritised over those of a local paper.

“But what about when the camera crews and TV trucks roll out of town and onto somewhere else? The local reporters will still be there covering these clubs, and they would do well to remember that and do everything they can to accommodate them.”

Posting on Twitter about his own access struggle on Tuesday, Leigh wrote: “Following Boreham Wood’s decision to ban Southend’s local paper from attending their FA Cup tie, Dagenham & Redbridge have followed suit by refusing to grant me a press pass for tomorrow’s game against Notts County.

“But, of course, they pointed out that I can watch it on a stream.

“Once again visiting regional papers are being treated with contempt. I’m aware of many journalists who have also had the same problem, but the National League aren’t interested. It’s a disgrace.”

Leigh later revealed the row had been resolved by Dagenham’s media manager George Benson, who”found room for me and was absolutely brilliant”.