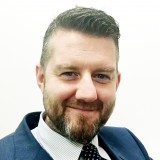 A football club refused a regional journalist access to its stadium and told him he must pay for a live stream of a match he was due to cover.

Torquay United informed Leigh Curtis, Notts County writer at the Nottingham Post, that he would not be given a press pass for the two teams’ game in Devon on Saturday.

Instead, he was told he would have to pay for a live stream of the National League match.

Leigh has hit out at the move, which comes after a series of recent access controversies involving regional journalists covering the National League, the fifth tier of English football.

HTFP reported in December how Leigh, pictured, had initially been denied a press pass for County’s game against Dagenham & Redbridge, although the decision was later reversed by the host club.

Tom Scargill, who covers Halifax Town for the Halifax Courier, also called for new regulations guaranteeing the right of admission for local sports reporters to all games in the same month.

After he was refused a press pass at Weymouth FC, Tom warned clubs they were in danger of putting regional press jobs at risk because of the reduced amount of coverage journalists could give when barred from stadiums.

Posting about the latest controversy on Twitter, Leigh wrote: “Torquay United have informed me no visiting written press being granted access for the game against Notts on Saturday, despite restrictions being relaxed.

“Unlike Yeovil, Woking and Boreham Wood, who all provided free streams, that is not Torquay’s policy.

“Hartlepool and Solihull Moors were both extremely accommodating in recent weeks and couldn’t have been more helpful or prepared.

“Same with Notts, Stockport et al. Surprised at Torquay given they were once a Football League club. Still it will be another tenner for their pot.”

Leigh went on to describe press access policies in the National League as a “Total Wild West” after MailOnline head of sport Steven Fletcher branded the move “shambolic”.

Speaking to HTFP, he said: “The National League continues to let clubs do whatever they want when it comes to media access for print journalists.

“The only people missing out here are the fans.

“Fortunately, clubs like Hartlepool, Stockport, Notts, Solihull Moors and others understand the importance of visiting local media and the communities they serve.”