A regional daily has officially dropped the word ‘evening’ from its name – but will keep it on its masthead for the time being.

The Glasgow Evening Times has rebranded as the Glasgow Times in a move it hopes “will renew local roots.”

The first edition of the new look Times, published this morning, featured the word ‘evening’ in smaller letters on the masthead – but HTFP understands this will be removed once the new name is established.

To mark the relaunch, the Times has launched a foodbank campaign called ‘Bank On Us’ and inserted a paper bag inside every copy, which it is asking readers to fill with goods to help the poor of its patch. 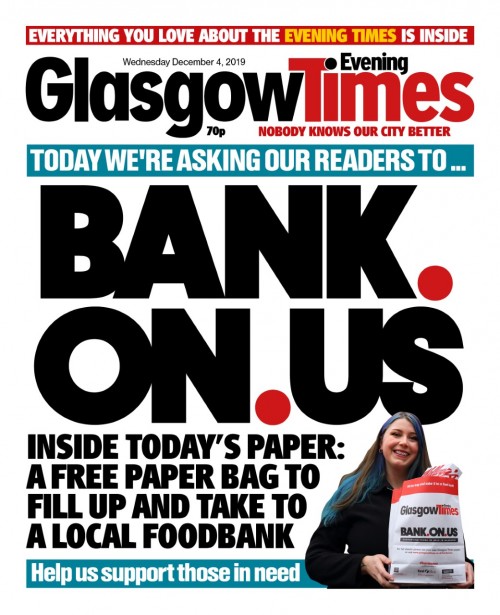 The relaunch comes after owner Newsquest last month promoted Callum Baird, editor of The National, to oversee the newspaper in addition to his existing duties with the company.

Last month Callum unveiled a redesign of the Times to allow the paper to “better showcase our exclusive scoops and pack in even more stories”.

He said: “We have exciting news for Glasgow’s loyal army of Evening Times readers – our newspaper is taking steps to put the city even more at the heart of everything we do.

“We’ll still have the best journalists in Glasgow working to bring you the biggest news stories that matter to you – and everything our readers love about the title will still be there.

“We just want to make sure that everybody know that we are the only newspaper which is solely focused on our incredible city.

“Whether it’s breaking news, crime, entertainment, the latest Old Firm updates, local heroes, heart-warming stories – if something is happening in Glasgow, then you will read about it first in our pages.

“Nobody knows Glasgow better than the ‘Glasgow Times’.”

The change of name was announced yesterday in an editorial looking back on the paper’s history.

It states: “Despite every effort to innovate and keep abreast of a fast-changing Scotland, the Evening Times could not escape the fate of the rest of the country’s press as it was overtaken by social and technological developments it found itself ill-equipped to deal with.

“As circulations declined, it was hard to maintain the same quality of editorial output. But of course, the newspaper industry is capable of innovation too, which may enable it to redefine its role for readers who are nowadays often more demanding in their specialised interests. Glasgow is a good place for this.

“Glaswegians remain local patriots, especially as the city has once again been redefining itself, this time as a centre for the advances of the digital age.

“On the old Evening Times, it is time for a relaunch. The first appearance of the Glasgow Times tomorrow will preserve in half its title one link with the past, but with the other half, it will renew local roots that have plenty of life in them yet.”

Other regional titles to have dropped ‘evening’ from their name in recent years include the Lancashire Post and Wigan Post in 2017, while the North West Evening Mail rebranded as The Mail in the same year.

However some other titles – such as the Manchester Evening News, Edinburgh Evening News and Norwich Evening News – have retained the ‘evening’ despite the move to overnight printing.