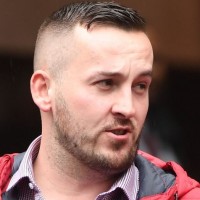 A pro-Brexit ‘yellow vest’ leader has been found guilty of assaulting a regional daily’s photographer.

James Goddard, left, has been convicted of the offence after Manchester Magistrates’ Court heard he grabbed at Manchester Evening News photographer Joel Goodman’s camera while he was covering a protest in February.

He was cleared of using threatening words or behaviour to cause his victim to fear “immediate” violence at the rally in Manchester city centre on 9 February.

The Independent reports police officers had been called into court at Goddard’s trial today after he held up a piece of paper bearing the words “pussy coward leftist soy boy” while Joel was giving evidence, although district judge Mark Hadfield chose not to pursue the matter as a contempt of court issue.

After hearing evidence from both parties, the judge convicted Goddard of common assault.

He was cleared of using threatening words or behaviour in relation to him telling Joel: “I swear to God when there’s no police around here, I’m going to take your head off your shoulders. Your card is marked.”

Goddard told the court his words were a “common English idiom”.

He was fined £300 for the common assault, and ordered to pay £500 in prosecution costs, as well as £50 compensation to Joel and a £30 victim impact surcharge.

A two-year restraining banning him from approaching Joel was also imposed.