A leader of the pro-Brexit ‘yellow vest’ campaign threatened a regional daily photographer at a protest – saying he would “take his head off his shoulders.”

James Goddard was caught on film issuing the threat to Joel Goodman, who was working a shift for the Manchester Evening News, adding he would be “finished” the next time he visited London.

Mr Goddard, pictured, was attending a demonstration in Manchester’s Piccadilly Gardens when the incident took place on Saturday.

According to the MEN, Goddard was also seen facing off with a female counter-protester while police tried to intervene. 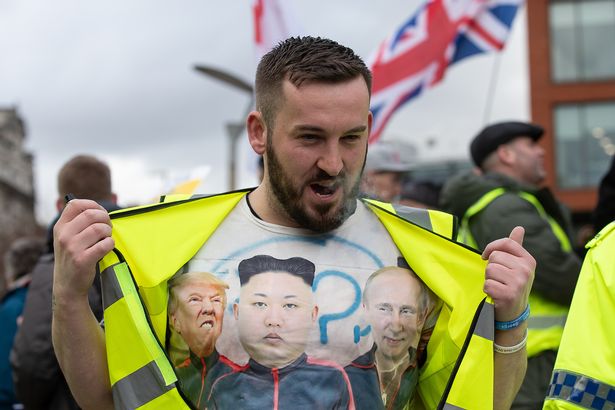 In video footage captured by Joel, Mr Goddard can be heard to say: “I’ve warned you, I swear to god when there’s no police around here, I’m going to take your head off your shoulders, and all the football lads will as well, your card is marked.

“Trust me, next time you’re in London mate, you’re finished. All the football lads know exactly who you are and you will be ran out of London. Next time you’re down, you’ll see what happens.”

The incident is the latest in a series of threats issued to regional journalists in the course of thier work.

Last month HTFP reported how Susie Beever, who works for the Huddersfield Daily Examiner and Leeds Live, received an email saying she would pay “the ultimate price” for covering a far-right protest in Leeds.

And in November, Susie’s Examiner and Leeds Live colleague Stephanie Finnegan revealed she had been issued with a panic alarm by Reach plc, the titles’ owner, after she received rape and death threats while covering the ‘Tommy Robinson’ contempt of court case earlier in 2018.

Mr Goddard was arrested on suspicion of public order offences last month, in relation to incidents outside Westminster which saw MPs verbally abused by protesters. He since claimed he had been ordered to leave London as a condition of his bail.

Greater Manchester Police said there were no arrests or reported disorders following the protest.