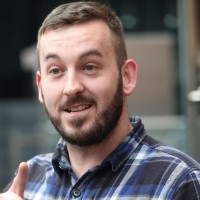 A pro-Brexit ‘yellow vest’ leader demanded journalists be removed from court before denying assaulting a regional press photographer at a demonstration.

The alleged incident is said to have taken place in Manchester city centre on 9 February, during a demonstration.

According to the MEN, Goddard walked into the courtroom today and demanded members of the media be removed.

He told the court: “I don’t want the media in here, get them out, I want my family and friends here.”

Goddard, of Altrincham, also labelled one journalist “scum” and said he was a member of the “far leftist BBC”.

The 29-year-old pleaded not guilty to common assault and to using threatening, abusive or insulting words or behaviour to provoke fear of unlawful violence.

Goddard, who represented himself in court, said: “There is no case to answer.”

As part of his bail conditions, Goddard must not contact Joel or attend any organised demonstration in Manchester city centre.