A new newspaper is set to be launched on an island which is set to lose its historic print title next week.

Argyll Media Ltd has announced the launch of Isle of Bute News after JPIMedia confirmed it was ceasing publication of The Buteman, which has served the Scottish island since 1854.

The Buteman is set to go to print for the last time next week, while the weekly Isle of Bute News will hit newsstands for the first time on Friday 21 June, priced £1.

Argyll Media currently runs the Dunoon Observer and Argyllshire Standard, and the new title will be edited from the company’s Dunoon office, on the Cowal peninsula, by Observer editor Gordon Neish. 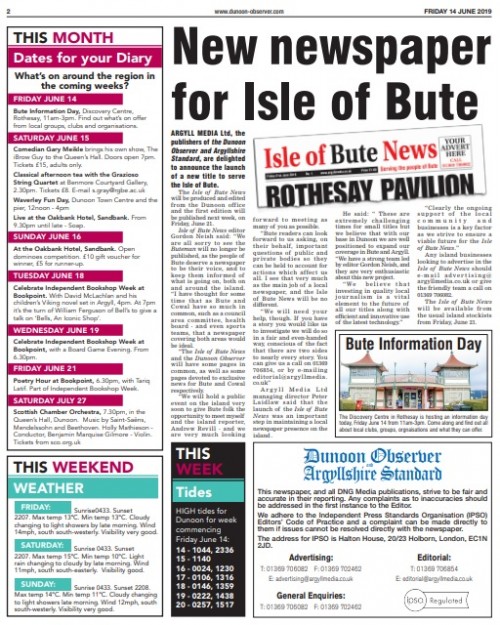 The new newspaper’s masthead was revealed in today’s Observer

Said Gordon: “We are all sorry to see the Buteman will no longer be published, as the people of Bute deserve a newspaper to be their voice, and to keep them informed of what is going on, both on and around the island.

“I have thought for some time that as Bute and Cowal are physically so close to each other and have so much in common, such as a council area committee, health board – and even sports teams, that a newspaper covering both areas would be ideal.

“The Isle of Bute News and the Dunoon Observer will have some pages in common, as well as some pages devoted to exclusive news for Bute and Cowal respectively.”

Bute is a five-minute ferry crossing from Cowal, and reporter Andy Revill will spend at least one day a week on the island. The News will be initially run to 32 pages, with its print run still to be confirmed.

Argyll Media Ltd managing director Peter Laidlaw added: “These are extremely challenging times for small titles but we believe that with our base in Dunoon we are well positioned to expand our coverage in Bute and Argyll.

“We have a strong team led by editor Gordon Neish, and they are very enthusiastic about this new project.

“We believe that investing in quality local journalism is a vital element for the future of all our titles along with efficient and innovative use of the latest technology.

“Clearly the ongoing support of the local community and businesses will be a key factor as we strive to ensure a viable future for the Isle of Bute News.”

As reported by HTFP last month, The Buteman, which is run by JPIMedia staff based in Edinburgh, had called for the “community’s support” in an online post in which the paper noted it no longer had a reporter based on patch.

However the company subsequently confirmed that it would cease publication.

JPIMedia declined to comment on the reasons for the closure, but HTFP understands the paper’s circulation figures had dropped below 550 and that the company believed the title was no longer sustainable.