Weekly which launched ‘local stories’ plea to close after 164 years

A weekly newspaper which recently launched a plea for readers to help fill its pages with “local stories” is to close after circulation dropped to below 550.

HTFP reported last month how The Buteman, which serves the Scottish island of Bute and is run by JPIMedia staff based in Edinburgh, had called for the “community’s support” in an online post in which the paper noted it no longer had a reporter based on patch.

Now it has been confirmed that the title, first published on 13 December 1854, will cease publication, with its final issue coming out in the week commencing 17 June.

JPIMedia has declined to comment on the reasons for the closure, but HTFP understands the paper’s circulation figures have dropped below 550 and that the company believes the title is no longer sustainable. 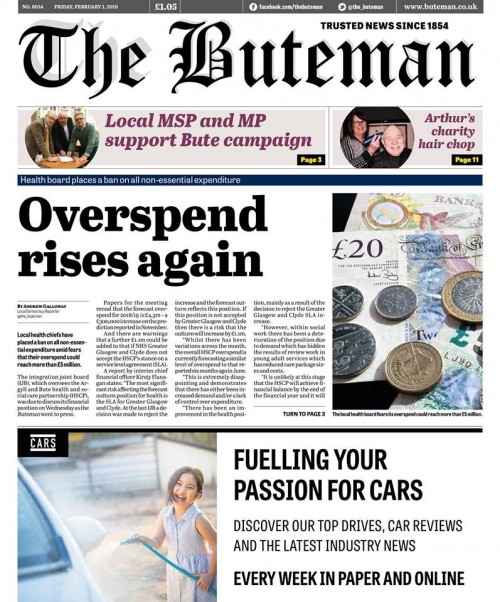 Its closure comes less than a year after Bute was the scene of one of the biggest news stories of 2018, when six-year-old Alesha MacPhail was abducted, raped and murdered while visiting her grandparents on the island.

No jobs will be lost as a result of The Buteman’s closure. Its sole reporter, Kevin Quinn, and its editor, Janet Bee, are both based in Edinburgh on the opposite side of Scotland from the West Coast island.

Kevin also works on JPIMedia sister weekly the Midlothian Advertiser, which covers the area south of Edinburgh, while Janet oversees 21 other titles in her role as the company’s Scottish weeklies editor.

In 2017, HTFP reported how an Argyll and Bute councillor had organised a public meeting designed to pressure JPIMedia predecessor Johnston Press into increasing the number of local news pages in The Buteman.

The meeting was prompted by the departure of the paper’s then island-based reporter, with Cllr Robert MacIntyre claiming that only around four pages were devoted to local news each week with the rest of the 24-page paper filled with content from JP’s other Scottish titles.

JP issued a statement reassuring islanders that The Buteman was being produced with “support from other members of our editorial teams” and the vacant island-based reporter role was subsequently filled.

However, a later JP restructure saw the island-based role axed, at which point management of The Buteman moved entirely to Edinburgh.