A sports journalist diagnosed with cancer for the second time has launched a bid to get more people to become stem cell donors.

HTFP reported two weeks ago how Newark Advertiser journalist Warwick Lane had been told he had leukaemia again 15 months after an initial diagnosis which he successfully battled.

As part of his treatment, Warwick will have a stem cell transplant which it is hoped will prevent further recurrence of leukaemia.

Now he is teaming up with blood cancer charity Anthony Nolan in a bid to find matches for other people across the world. 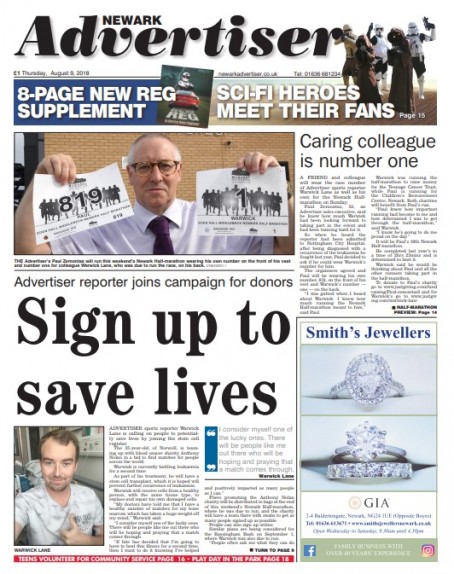 Warwick told the Advertiser: “My doctors have told me that I have a healthy number of matches for my bone marrow, which has taken a huge weight off my mind.

“I consider myself one of the lucky ones. There will be people like me out there who will be hoping and praying that a match comes through.

“If fate has decided that I’m going to have to beat this illness for a second time, then I want to do it knowing I’ve helped and positively impacted as many people as I can.”

Anyone joining Warwick’s campaign can spread the message on social media using the hashtag #WarwicksWarriors.

Warwick’s new diagnosis meant he had to cancel plans to run the Newark half-marathon for charity at the weekend.

In his place, Advertiser colleague Paul Zemontas has stepped up to compete.

Both Warwick’s campaign and Paul’s decision to run featured on the Advertiser’s front page on Thursday, pictured.

Alex Cupit, online recruit-ment lead at Anthony Nolan, said: “Warwick is bravely sharing his story to raise awareness and support the 2,000 people each year who, like him, need a stem cell transplant. I would encourage anyone who is aged 16 to 30, and in good health, to consider joining the Anthony Nolan register.

“Joining the register involves filling out a form and swabbing your cheeks. If you are a match for someone, 90%pc of stem cell donations take place via the bloodstream in a straightforward process.

“We particularly need more young men to join the register. They account for more than half of all donations but make up just 16pc of the register.”

To find out how to join the Anthony Nolan register and about other ways you can support the charity, click here.