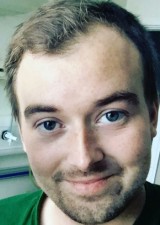 A weekly newspaper journalist has died aged 25 just weeks after being diagnosed with cancer for a second time.

Tributes have been paid to Newark Advertiser sports reporter Warwick Lane, who died in hospital on Thursday night after an unexpected deterioration in his condition.

Warwick, known as Rick to colleagues, fought off leukaemia after five months of chemotherapy following an initial diagnosis last April.

But he was told his cancer has returned in July, describing his second diagnosis in a piece for the Advertiser as the “follow-up story I never wanted to write”.

Advertiser news editor Dan Churcher said: “Everyone who met Rick cannot fail to have appreciated what a lovely, cheerful, kind guy he was. The world is a lesser place without him today. I am proud to have worked alongside him and to have called him my friend.

“He was a brilliant sports reporter, a popular colleague and, more so, a good man. He was somebody we could rely upon and always a happy volunteer to go the extra mile.

“He loved life, lived for his family and friends, loved his job and local sports, as demonstrated by the love the local sporting community showed him in return after his diagnosis.

“I will always be grateful to his family for allowing me to spend a few precious minutes with Rick on Thursday and to hold his hand and wish him farewell. Having met his family, I can only say that I now know how Rick came to be such a special person and my thoughts are with them at this time.”

Warwick had recently taken up running, and raised more than £1,000 for the Teenage Cancer Trust before his new diagnosis meant he had to pull out of last month’s Newark half-marathon.

HTFP reported how he had also teamed up with blood cancer charity Anthony Nolan in a bid to raise awareness of people awaiting stem cell transplants.

The campaign, known on social media as #WarwicksWarriors, urged more people, especially those aged 16 to 30, to join the Anthony Nolan donor register.

Advertiser editor Sharon Hodkin said: “We are all truly devastated by Rick’s death. He was so positive at his diagnosis and was determined to beat the illness again.

“This positivity was the thing I will remember most about him. He brightened the newsroom with his humour and enthusiasm. He loved his job and loved meeting people.

“The messages of love and support sent to the Advertiser on Rick’s diagnosis shows how well-liked and respected he was in the community. He was not just a colleague at the Advertiser but a friend to us all.”

In an obituary for Warwick, the Advertiser thanked Nottingham City Hospital for the “wonderful care” Rick received on its Fletcher Ward and in the Critical Care Unit.