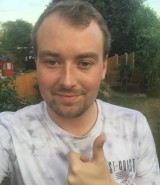 A sports reporter says he is “determined” to beat cancer after being diagnosed with the disease for the second time in 15 months.

But last Tuesday he was told his cancer has returned despite his latest blood tests coming back as “initially positive”.

Warwick, 25, has written of his determination to beat the disease in a piece for the Advertiser, which he has described as the “follow-up story I never wanted to write”.

He wrote: “The diagnosis came completely out of the blue because I was starting to feel stronger and healthier than at any point in my life.”

Warwick had recently taken up running, and has raised more than £1,000 for the Teenage Cancer Trust.

He added: “I would be lying if I said I wasn’t devastated by the news as I really thought that cancer was a chapter of my life I had put behind me. I’ve beaten this horrible illness once, and I am determined to do it again.

“I love my job at the Advertiser, and I have made so many friends in my quest to produce a sport section I am proud of on a weekly basis. During my first treatment, I was overwhelmed by the support of my family, friends, and the sporting community as a whole.

“To know I have so many people behind me makes what I’m about to go through a lot less daunting. This could be another long journey, but I know a lot more about the illness now and will be prepared for what lies ahead.

“I will be under the care of the best doctors and nurses on Fletcher Ward at Nottingham City Hospital a patient can ask for, and they will give me every possible chance of getting through this. Even though my world has been turned upside down once again, I will be back.”