Regional daily calls on minister to quit over rail chaos 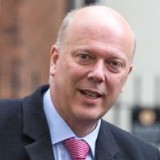 A regional daily has renewed calls Transport Secretary Chris Grayling to resign over the “contempt” he has shown for its patch over problems with the rail network.

The Yorkshire Post says Mr Grayling, left, must leave his post after a week of “rail chaos” which has seen hundreds of Northern rail services delayed or cancelled in recent days.

Editor James Mitchinson last week publicly invited the Minister to be interviewed in a live on-camera broadcast by the Post’s op-ed editor Tom Richmond – saying people in the North of England deserve a “frank conversation” with Mr Grayling over the issue.

A number of opinion pieces have also been published in the Post calling for his resignation.

In the latest, published on Friday, the Post said: “By attempting to blame for this week’s rail chaos on others, Transport Secretary Chris Grayling could not have been more disingenuous.

“After suggestions the region’s ‘knackered old trains’ could be apportioned to British Rail, which was abolished in 1994, he now says Northern leaders are also culpable.

“‘What has happened has been unacceptable for passengers, but I would also remind him that this is one of the most devolved franchises in England, it is one where the management of the franchise is shared by my department and northern leaders through Rail North, so it is not simply a question of my department,’ he told incredulous MPs.

“The audacity. He intimated that there wasn’t a shortage of drivers – he said delays stemmed from Network Rail not delivering track improvements on time – and he intended to see “whether Rail North together has done enough of a job in monitoring these problems.

“The latest problems cannot be blamed on local leaders. It comes down to the Department for Transport, and subsidised operators like Northern Rail, not foreseeing the possible pitfalls. For this, Mr Grayling – as Transport Secretary – must take full responsibility.

“And for him to claim that ‘improving the service for Northern customers’ is belatedly the DfT’s ‘number one performance priority’, the operator’s track record has been so dismal for so long that this should have been the case long before this week’s misery for passengers revealed, once again, the Minister’s contempt for this region.”