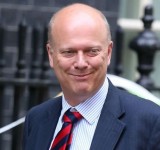 Aides of transport secretary Chris Grayling have asked a regional daily to stop calling him by the nickname “Failing Grayling,” a celebrity news website has claimed.

Gossip site Popbitch has alleged that representatives of the transport secretary have contacted the Yorkshire Post over the newspaper’s continual use of the term in its pages.

The Post was the first newspaper to use the ‘Failing Grayling’ epithet which has now been taken up by large sections of the print and broadcast media.

Post editor James Mitchinson declined to comment on the claims when approached by HTFP, but admitted on Twitter that the newspaper’s appearance in Popbitch had been a “proud moment” – adding he had “long been a fan” of the site.

The Post has previously called for Mr Grayling, pictured, to resign over what it describes as the “contempt” he has shown for its patch over ongoing problems with the rail network.

He has also recently come under fire for awarding a ferry contract to a company with no ships.

The Popbitch post states: “Poor Grayling is clearly struggling to cope having become the whipping boy for everyone with a mean word to say about this government.

“Apparently his people have been in touch with the Yorkshire Post, asking them to desist from always calling him ‘Failing Grayling’ as he really doesn’t like it.”

Linking to an opinion piece entitled ‘The Yorkshire Post says: Failing Grayling – Theresa May put on spot over ferry deal’, Popbitch added: “It doesn’t seem to be working though…”

In addition to the response by James on Twitter, the Yorkshire Post opinion section’s official account posted: “Be happier still when Chris Grayling – or Failing Grayling as we dubbed him before any other media outlet – gets his P45.

“No longer a joke for all those lives ruined by his mismanagement of railways.”

HTFP has also approached Mr Grayling’s office for a comment.