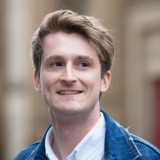 A reporter at a city news website has become the latest regional journalist to open up about their past battles with depression and anxiety.

Glasgow Live’s Gary Armstrong, left, has spoken out about suffering from panic attacks in a piece for the site, saying he has chosen to share his experiences with mental health issues “in the hope it may help even just one person who is struggling”.

In his piece, run as part of the site’s regular ‘Glasgow Lives’ feature, 29-year-old Gary explained how he had been “greatly inspired” by two former colleagues who have also suffered from mental health issues.

Other regional journalists to speak out on their personal mental health experiences this year include Manchester Evening News what’s on editor Simon Binns, who revealed he had suffered two nervous breakdowns, and Wales Online’s Bronte Howard, who discussed suffering from post-traumatic stress disorder following a controlling and abusive relationship.

Former Oxford Mail assistant news editor Esther Beadle has also written in recent months of how she had contemplated suicide when she went missing for almost two days in 2016.

In his piece for Glasgow Live, Gary wrote: “I am acutely aware of our city’s mental health problem. A few years ago, I suffered badly from depression and anxiety. People are often surprised when I tell them that. I think I am seen largely as a confident and happy person. And a lot of the time, that’s who I am.

“But depression can hit anyone, from any walk of life. It can be random in that sense, as random as other illnesses can be. A fear I had at the time would be that people would question how I could be depressed. I had close family, close friends and a great upbringing. I always had a roof over my head, no financial worries and was more fortunate than most in what I got to experience in my life at a young age. And all this fed into the denial.

“It started with panic attacks. As time wore on, over a period of years, all my worries and fears intensified in my head. The only way I could escape it was by keeping my mind occupied. No-one would ask me to, but I’d end up going into my empty office at the weekend to work as a means of escaping my thoughts. I could be having a one-on-one conversation with a friend or my girlfriend in a bar, zone out and not hear anything they were saying, because my worries – largely totally irrational – would take over. Now, I describe the experience as like your head being a pressure cooker, just waiting to explode.

“Back then, it was still seen as a taboo subject. I was once in a meeting where someone referred to their colleague as ‘being off work because of that depression shit’. I eventually reached breaking point.”

Gary described choosing to get help at that point as “the best decision I ever made”.

He wrote: “Depression has always existed. Only perceptions have changed. And what I feel I’ve witnessed in the past couple of years is a sizeable shift. People are talking about it more. I believe it’s making a difference.

“I am greatly inspired by two of my former colleagues, both young and fit, who have also suffered from mental health issues. The first one decided to bare their soul one evening on social media, letting the whole world know what they were going through. The second came into the office one day to be met with the standard greeting of ‘Morning, how are you?’. Their response: ‘Aw, I’m suffering from depression.’

“For me, that’s how it should be. Just another state of mind you are going through at the time, along with happiness, sadness, elation, fear.”

Gary added: “Now, when a friend, family member or colleague tells me they’re suffering, my reaction isn’t of surprise. Depression is that commonplace. Reading this – in all probability – you will know someone who is going through it, has gone through it or perhaps you’re going through it yourself.

“I chose to share all of this with Glasgow Lives in the hope it may help even just one person who is struggling in our city.”

Speaking to HTFP about the reaction the piece has had, Gary said: “The response to the article has been hugely overwhelming, in the most positive possible way.

“The number of people who have messaged me since to say that they are suffering or have suffered from depression has been well into the double figures. I understand this may be a surprise to some, but it just shows people are not alone when they are struggling.

“The purpose of the article was to encourage people to speak openly about their problems and try to accept their feelings – hopefully it has helped one or two do that.”