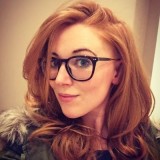 A former regional daily journalist who contemplated suicide after going missing for almost two days has called for more support to be given to people who have gone through the same experience.

Esther Beadle, left, was assistant news editor at the Oxford Mail when she disappeared for 41 hours in January 2016 before making herself known to mental health staff at St Thomas’s Hospital, in London.

Esther, who last year won praise for going public on her battle with alcoholism while working as a reporter at the Aberdeen Evening Express, was fighting an ­undiagnosed borderline personality disorder at the time of her disappearance.

She has now opened up on the matter in a bid to raise awareness of the lack of help available to former missing persons.

In a piece for the Daily Record, Esther wrote: “I went missing on Friday, 29 January, 2016. 10pm. It was simply a case of one minute I was where I was ­supposed to be. The next I wasn’t. I think this was somewhat deliberate on my part. But at the same time my intention was never to be ‘missing person’.

“I ended up walking around London, paying my way in cash and avoiding police officers the best I could. I did this for 41 hours, until, exhausted and on the brink of ­scurrying somewhere dark to take my own life, I walked into A&E at St Thomas’s Hospital and asked to see the mental health crisis team. Had I not done that, I would have been found about a mile away. Dead.

“You might all be breathing a sigh of relief. Thankful for a happy ending, a safe resolution to the story. But you would be wrong to think that. Not because it isn’t a very good thing I didn’t kill myself – I’m pleased I’m still here – but you would be wrong to think this is the end of the story. This is the biggest mistake that is made so often in missing persons cases and it is so easy to make.

“Missing does not end when a person returns. The moment of return, of ­reappearance, is not the final ­conclusion. It is just the start. What followed for me was a strange, out-of-time few weeks, months, now years, in which my life changed completely.”

Esther added the experience was “singularly the most traumatic, significant and confusing upheaval I have ever gone through”, and that she has had to navigate the aftermath “completely and utterly blind”.

Her disappearance received national media attention at the time, leading to what Esther described as a “logistical, administrative and emotional nightmare” once she returned from being missing.

She wrote: “As far as the rest of the world was concerned, I was missing, then I wasn’t. I spoke to police once. During what was then the ‘safe and well’ check. The officer checked my name, address, date of birth, no crimes to report. And then he was gone. He didn’t know or care about the national media coverage that was firing on all pistons.

“He didn’t know how I was eventually getting back to Oxford. He didn’t know where I had gone, why I had gone there. This is why we must work towards return interviews becoming a statutory requirement for returned adults. If I ever go missing again, and yes, there is a chance that might happen given my mental illness, then there’s not much for police to go on.”

“What we need is the development of a safe, dedicated space in which returned adults can explore what’s happened to us, come to terms with what we’ve ‘done’ and get support in working out how we come safely back into society.

“Return from missing should always be seen as an opportunity – to learn, to prevent and, above all, to help someone reclaim their life as their own.”

Speaking about her decision to write about going missing, Esther told HTFP: “I think the important thing in this is people realising what goes on behind the headlines for the person at the centre of it all. And that the story doesn’t end when people turn up. An estimated 300,000 people go missing a year. Many of those will return within 48 hours. But as it’s stands, there’s limited requirements or pathways on how they can be supported, and indeed support themselves, on return.

“It’s absolutely an issue that requires the police, social services, NHS and the voluntary sector to work together. This is not a ‘police’ issue, but they are the ones most likely to have at least some contact with a returned missing person. They have a golden opportunity to act as a bridge to direct people to organisations that can support them, if that is needed or wanted.

“Missing people and others are doing great work on finally listening to the voices of returned adults, which will help prevent return episodes, as well as give much-needed support and guidance for this very silent population. That’s sort of where I’m coming from in all this.

“I’ve been contacted by so many people who have gone through this since the piece was published, thanking me, because they had been through similar and yet had never ever heard from someone else that had shared that. And that to me is vital. 300,000 people a year. And yet almost nothing to help them navigate this.”