Editor hits back at ‘prissy Baron’ over ‘Boris-hating’ slur

A war of words has erupted between a regional daily editor and a Tory peer who attacked his newspaper as a “Boris-hating organ.”

James Mitchinson has defended the Yorkshire Post after Lord Moylan launched an attack on the newspaper over its front page on Saturday.

The story reported fears that Prime Minister Boris Johnson’s ‘levelling-up’ agenda would not do enough to aid the economies of the North of England’s rural areas.

The splash prompted Lord Moylan to share his “fears” on Twitter that Yorkshire had been “transformed into a county of leftist whingers begging for handouts.” 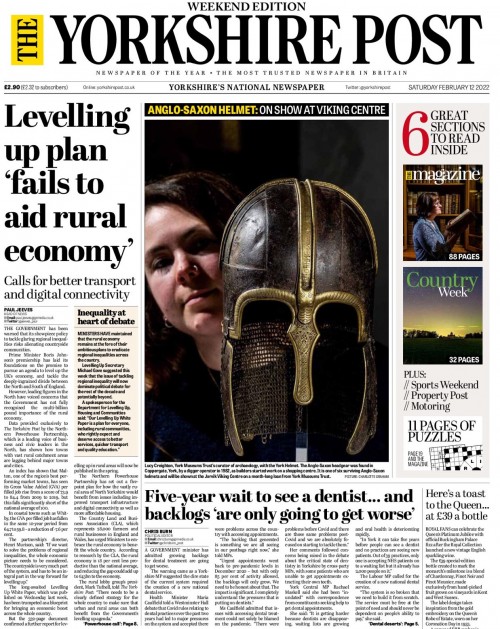 In turn, James retorted that the county’s people were “thoroughly fed up with sneering politicians who think they’re better than us and an awful lot of people who cannot stand liars and charlatans”.

And the row escalated today after James penned a ‘Valentine’s Day love letter’ to the peer in today’s newspaper.

Posting a link to the letter, Lord Moylan tweeted: “James Mitchinson loves dishing it out to Tories but is amazingly thin-skinned to criticism of his Boris-hating organ.”

In reply, James said: “I don’t ‘love dishing it out to Tories’ but I will defend the work of my team against scurrilous smears from prissy Barons and will continue to examine the choices made by any Prime Minister without fear – despite your pressure – or favour.”

The exchanges continued into the evening with Lord Moylan branding the Post a “sad, chippy cesspit.”

In the letter, James wrote: “Thank you for revealing who you are and what you think of us: ‘a county of leftist whingers begging for handouts’. I must ask: does that sentiment run through your party, or is it unique to you?

“It is somewhat alarming, though, that what seems to have led you to forming your offensive view of those who live in Yorkshire is our consistent, relentless, fearless campaigning journalism on behalf of those who proudly call Yorkshire their home and this newspaper’s rejection of the toxic form of deceptive populist politics that has brought more scandal and disgrace to the great office of UK Prime Minister than it deserves.”

The row comes after James last month declared that the Prime Minister is “no longer welcome” at the Post following the Downing Street Parties scandal.

The Post, historically a Tory-supporting title, has demanded the departure of ministers including Chris Grayling and Gavin Williamson under James’s leadership, as well as Mr Johnson more recently.

James declined to comment further on the issue when approached by HTFP.