A city daily is aiming to help its readers “beat the squeeze” as the cost-of-living crisis hits.

The Glasgow Times has launched a new campaign that will offer advice to those struggling with their budgets.

Money-saving experts will offer their opinions in the pages of the Times, while the Times will also list places where readers can get financial help.

The Times, which launched the campaign on Monday’s front page, pictured below, is also calling on politicians to do “much, much more” to help those affected. 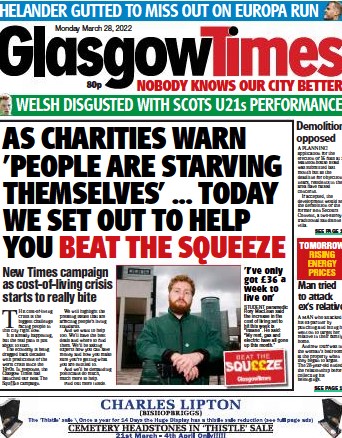 An accompanying editorial reads: “The cost-of-living crisis is the biggest challenge facing people in this city right now. It is already happening, but the real pain is just about to start.

“The economy is being dragged back decades with predictions of the worst crisis since the 1970s. In response, the Glasgow Times has launched out Beat The Squeeze campaign.

“We will highlight the pressing issues that are affecting people’s living standards. And we want to help too. We’ll have the best deals and where to find them.

“We’ll be asking experts how you can save money and how you can make sure you’re getting what you are entitled to. And we’ll be demanding politicians do much, more more to help.”

It comes after a similar campaign was launched by the Derbyshire Times earlier this month.

Both Newsquest and Reach plc are running surveys on the impact of the crisis on their readers, while the latter has also appointed its first reporter dedicated to the issue in the shape of Jamie Lopez at Lancs Live.