An anonymous donor paid off a disabled woman’s £5,000 debt after reading about her plight in a regional daily.

The reader came forward after Kyra Edwards opened up about her financial struggles to the Glasgow Times.

Ms Edwards, 28, told Times journalist Kirsty Feerick how she was facing the choice between eating and heating as she battled to pay off her debt from a previous relationship and tried to keep up with bills.

The anonymous donor transferred £5,098.46 with “no strings attached” to her account after getting in touch with Kirsty following the story’s publication, with the gesture providing a splash for the Times on Tuesday (12), pictured below. 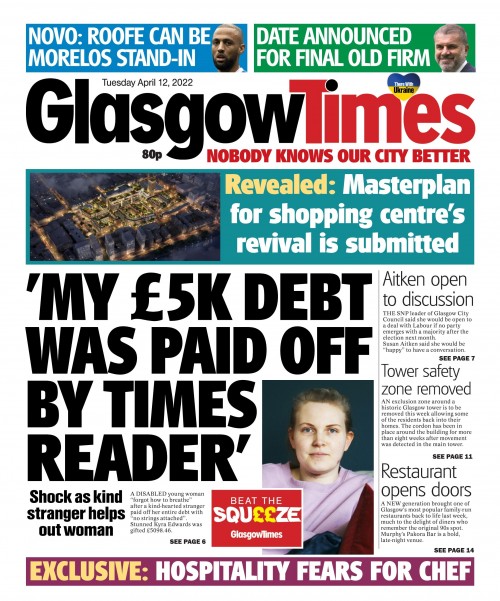 Ms Edwards told the Times: “I never expected anything to come from sharing my own experience, other than hope that it would put a light on a crisis that so many people deal with every day.

“When Kirsty from the Glasgow Times messaged me to say someone had reached out to her about making a donation towards my debt I was surprised. I didn’t think anything would come of it.

“I gave her permission to query and sent over details and asked her to please thank them for me. I had no idea my life was about to change.”

Ms Edwards, who suffers from severe obsessive compulsive disorder, anxiety, and depression, shared her story as part of the newspaper’s ‘Beat the Squeeze’ campaign, which focuses on people affected by the cost-of-living crisis.

Times editor Callum Baird told HTFP: “When we launched our Beat the Squeeze campaign, we were setting out to help our readers get through this cost of living crisis – by campaigning on key issues, highlighting problems, and also giving our readers information on how they can save money and make changes to their lives in order to get by.

“But we didn’t expect the campaign to have such a direct and obvious impact on one reader like it has.

“We were as stunned as Kyra when we found out that an anonymous reader had paid off her debt after her story was featured in the Times.

“It just goes to show how important a role newspapers can still play in terms of making a positive difference to readers’ lives and we’re delighted for her.”