A scheme which will see Facebook pay local newspapers for their content is officially launching today – with a regional publisher being unveiled as the project’s latest partner.

Facebook News, a dedicated channel which allows users to access news stories relevant to them, will go live in the UK for the first time this afternoon.

The social media company says the move will put “original journalism in front of new audiences as well as providing publishers with more advertising and subscription opportunities”.

Archant, Iliffe Media, JPIMedia, the Midland News Association and Reach plc were revealed as among the first UK beneficiaries of the scheme in November, and Facebook has today named DC Thomson as one of a fresh group of participating media companies. 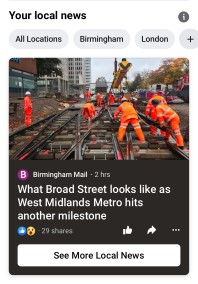 Key features of Facebook News include ‘Today’s stories’, which will be chosen by a team of journalists to “catch up on the latest news as it breaks throughout the day”.

The channel will also be personalised based on the news users read, share and follow, with specialist sections on business, entertainment, health, science & tech and sport also featuring.

Jesper Doub, director of news partnerships for Facebook in Europe, said: “We’ve been partnering with news organisations for many years and our goal has always been to work out the best ways we can support the industry in building sustainable business models.

“This product is a result of those conversations. As we invest more in news and pay publishers for more content in more countries, we will work with them to support the long term viability of newsrooms.

“We also recently announced we’re extending the Community News Project for another year. The £2.25m annual training fund in partnership with the National Council for the Training of Journalists trained reporters in 80 local newsrooms across the UK, building on the initial £4.5m investment.

“Facebook News was built to bring people closer to the stories that impact their lives and the community around them. Our aim is to build on our efforts to sustain great national and local journalism and create more value for publishers.”

HTFP has approached Facebook for further information on how the payment scheme will work.