Google is to start paying regional publishers for content which appears on its platform.

As part of Google’s licensing agreements with publishers, it is also giving readers the ability to access selected paywall content.

More than 120 publications in the UK will start curating content for News Showcase, and Google says many of them are local newspapers “who do not have the same resources that many larger, national papers have to invest in their digital transformation”. 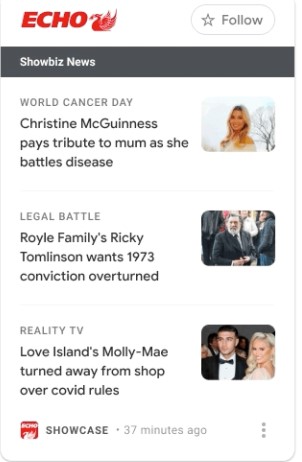 He said: “News Showcase content from our publisher partners will automatically start to appear in panels in Google News and Discover, and direct readers to the full article on the publisher’s site.

“Panels are already appearing in Google News on Android, iOS and the mobile web, and in Discover on iOS, and will start appearing in other versions of these products soon.”

The move has been welcomed by David Higgerson, chief audience officer at Reach.

He said: “For us, public interest journalism thrives when it is not just about recording events but is of genuine interest to the public and is able to attract an audience that means it is sustainable.

“Google’s work here will help give readers a new way to discover news which is important to them, which they may not otherwise have discovered.”