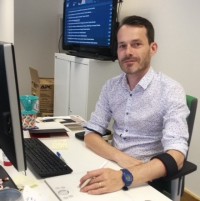 Two regional dailies are to regain dedicated editors after their current editor was poached by a rival publisher.

Newsquest has announced the departure of Pete Gavan, currently responsible for the Oxford Mail and Swindon Advertiser, who will take up a “central editorial role” with Reach plc.

As a result, Newsquest has now launched a search for new editors to run the Mail and Advertiser respectively.

The successful candidate in Oxford will also be responsible for the Oxford Times and Newsquest’s series of Oxfordshire weekly news brands, while the Advertiser editor will look after the Wiltshire Gazette & Herald and Wiltshire Times too.

Pete, pictured, joined the Advertiser as editor in 2017 and added the Mail to his portfolio last September following the departure of its editor Samantha Harman.

Newsquest previously merged the two roles in 2015, with then-Advertiser editor Gary Lawrence adding the Mail to his portfolio following the departure of Simon O’Neill.

The posts were later split again after Gary left the company in 2017, with Pete taking on the Swindon editorship and Samantha appointed to run the Mail.

Pete, who will leave Newsquest at the end of the year, said: “It’s been a memorable journey for the past four years from the very first day.

“I’ve enjoyed rising to the challenges as they’ve come along and it’s been a privilege to lead the teams through what will likely be the biggest story of their lives, with the pandemic.

“I’ll be sad to leave my colleagues, especially the incredible frontline reporters and the teams that make sure the Newsquest papers and websites are brilliant every day. Now I’m looking forward to the challenge of my new role and getting to know the teams across the Live network at Reach.”

The new editor roles at Newsquest will be based at the company’s new offices in Oxford and Swindon.

Julia Lancett, regional managing director for Newsquest Midlands South, Oxford, Wiltshire, Berkshire and Buckinghamshire, said: “Pete has done a fantastic job, it’s been a pleasure to work with him.

“He has led change and implemented various pilot projects across the respective regions.

“I would like to thank Pete for his valuable contribution, professionalism and wish him well in the next chapter of his career.

“Despite Pete leaving, it does present two fantastic editor opportunities to really spearhead Oxfordshire and Wiltshire, working with a team of incredibly talented journalists and a great portfolio of local news brands.”