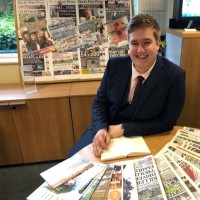 Two new regional daily editors have been unveiled by the newspapers’ publisher.

Newsquest has revealed the appointments of Andrew Colley at the Oxford Mail and Daniel Chipperfield at the Swindon Advertiser.

Andrew, pictured, will move to the Mail from his current role as Newsquest’s Buckinghamshire and Berkshire editor, where he oversees the Bucks Free Press, Reading Chronicle, Slough Observer and Bracknell News.

Daniel steps up from his post as deputy editor at Newsquest Midlands South, where he works on titles including the Worcester News.

Their appointments come after it was announced that Pete Gavan, who currently edits both the Mail and the Advertiser, would be leaving his post to become senior editor at Reach plc’s Live network.

Andrew will also be responsible for the Oxford Times and Newsquest’s series of Oxfordshire weeklies in his role, while Daniel will look after the Wiltshire Times and Wiltshire Gazette & Herald in addition to his duties with the Advertiser.

Andrew posted on Twitter: “I am delighted to be appointed as the new editor at Newsquest Oxfordshire and to get the amazing opportunity to lead an excellent team of journalists at historic titles like the Oxford Mail and Oxford Times.

“I cannot wait to get started and get to know the brilliant team of journalists and the many thousands of readers across Oxfordshire.

“I want to help build on a rich history of hard-hitting investigations, must-read exclusives and campaigns which can really make a difference.

“Finally, it will be sad to say goodbye to my award-winning team in Bucks and Berks — where we’ve achieved great highs in recent years. I know the brilliant team there will continue to thrive.”

Newsquest is currently seeking a replacement for Andrew in Berkshire and Buckinghamshire.

Daniel, who has family roots in the Swindon area, began his career with Newsquest on the Gloucestershire Gazette in 2012 before joining Gloucester newspaper The Citizen.

He became chief reporter there and then moved to Bristol Live as a trends writer.

Daniel stepped up to become content editor at Somerset Live and Bath Live, then one of Reach’s engagement producers for the South-West of England, before rejoining Newsquest in his current role in July.

He said: “I’m sad to be leaving the fantastic Midlands team after such a short spell as they made me feel so welcome and we achieved a lot in that time.

“But this is too good an opportunity to turn down. I am excited to take a leading role in how we go about setting the agenda and bringing people the news they want to see both in print and online.

“With family roots in the area, I’m proud to have the chance to lead the Swindon Advertiser, which as the latest JICREG data shows now reaches 79% of all Swindon adults every month.”

Newsquest Wiltshire digital audience and content editor Neil Beck will also take on the new role of deputy regional editor in the county as part of the restructure.